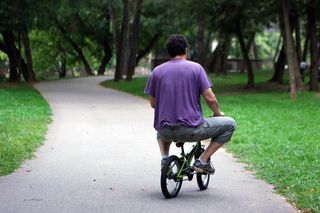 It is a commonplace for children to be taller than their parents, but four generations ago this wasn’t the case. A recent study of soldiers around the age of 20 who enlisted in the army during World War I revealed an average height of five feet six inches (168cm). Today the average for young men is five feet ten inches (178cm).

A gain of four inches seems a lot. But it is not unique to Britain; similar gains have been found in a range of western countries even though the timing differs. Over a slightly earlier period the Danes and the Spanish grew by about five inches while the French, the Italians and the Swedes grew by around four inches.

Yet in the longer span of history this is quite unprecedented. Economic historians have uncovered evidence on heights all the way back to the middle ages in order to chart what they call the biological standard of living. Across the generations there were ups and downs in height, but there is nothing like the four-inch gain of the past century.

If adult height reflects nutrition during childhood then we have a sensitive indicator of living standards. The 20th century saw dramatic improvements in diet. The quantity of food intake increased and its quality improved, as incomes rose faster than ever before. But in some countries economic historians have found that during the early stages of industrialisation average heights fell at the same time as income per capita increased. The most debated case is the US in the three decades before the civil war – this has become known as the “antebellum puzzle”. So income and height don’t always move in lockstep. But, as in earlier times, the correlation between trends in height and income is far from perfect.

Something else is at work: exposure to infection. Repeated infection during infancy and childhood slows growth as nutrition intake declines or is used by the body to fight disease. Predominant among these illnesses are respiratory infections, notably pneumonia and bronchitis, and gastro-intestinal infections, especially diarrhoea and dysentery.

The key factor here is the urban environment. Sanitary reforms improved the quality of water supply and the disposal and treatment of sewage. In urban districts horses disappeared from the streets and pigs from backyards. Equally important was the reduction in overcrowding and improvement in the quality of housing, as the slums were gradually cleared.

How do we know this? Our World War I servicemen hold some important clues. Those that grew up in localities with high infant mortality (a clear marker of the disease environment) tended to be shorter as adults. And we can confirm that the disease environment was worse the more households were overcrowded and the more industrial the district. In the heaviest industrial areas the servicemen were shorter by an inch. This effect would have faded as heavy industry declined and what remained became less toxic.

By tracing their families in the 1901 census we can also see the household circumstances of the servicemen when they were growing up. This reveals that those from middle class families were taller and those with more siblings were shorter. The latter reflects a trade-off between the quantity of children and their average quality in terms of health. This too was a source of height gain, as average family size fell from five in Victorian times to just two by the 1930s.

Did medical improvements also play a part? There is less hard evidence for this but access to better medical treatments, and to medical services for children, expanded only modestly until after World War II. Yet basic knowledge about nutrition and hygiene did percolate down the hierarchy of class and income. One hint of this – given that higher socioeconomic classes tend to have more education – is that in areas where parents (particularly mothers) were more educated the servicemen were taller.

Over the 20th century dramatic advances in education combined with smaller families meant significant improvements in the nurturing of children. These influences are hard to identify precisely, but they probably contributed more to increases in height, health and longevity than was previously believed.

Tim Hatton does not work for, consult to, own shares in or receive funding from any company or organisation that would benefit from this article, and has no relevant affiliations.