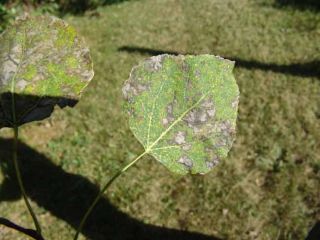 Plant growth might be stunted worldwide by the end of this century due to air pollution, a new report concludes.

Mounting ozone concentrations resulting from pollution will damage plants and block them from taking up the invisible, odorless gas that gives them life, the thinking goes. The change would occur despite the carbon dioxide boost to greenery that some have said global warming will provide.

As a result, carbon dioxide concentrations would build up in the atmosphere even more than expected, the study researchers say.

Some scientists have said that one of the benefits of global warming will be a boom in the plant population brought on by higher carbon dioxide levels that feed plants through photosynthesis. Plants do in fact act as an important carbon sink, or means of taking the potent greenhouse gas from the atmosphere.

But other factors, including ozone, come into play and may prevent plants from taking up as much carbon dioxide as they can get their leaves on.

Previous models have included the beneficial effects to plants, "but they haven't included the negative effects," said Stephen Sitch of the U.K. Met Office, lead author of the new study, published in the July 25 online edition of the journal Nature, which does exactly that.

While ozone forms naturally in the atmosphere from other chemical compounds, the amount of ground-level ozone has been increasing because these compounds are emitted by the burning of fossil fuels. And though stratospheric ozone is beneficial because it acts like a planet-wide layer of sunscreen, ground-level ozone can be harmful to humans who breathe it and toxic to plants that absorb it.

Plants normally take in ozone and other gases through their stomata, or pores, but when ozone levels surpass a certain amount, the gas causes cellular damage inside the plant's leaves, and they become visibly damaged with brown splotches.

The ozone also reduces the rate of photosynthesis in the plant and cripples its ability to grow.

"In effect the cells have been disrupted," Sitch told LiveScience. "Essentially the photosynthetic apparatus has been damaged."

Such damage could cause large economic losses through reduced crop yields.

Ground-level ozone has already reached high levels in some areas of the world due to industrial emissions, and concentrations of the gas in the atmosphere are expected to rise throughout this century.

But the problem isn't just a matter of more ozone. When carbon dioxide levels also rise, a plant can close some of its stomata and still take in the same amount of carbon dioxide it needs to feed itself. But the closures block ozone, possibly mitigating some of the gas's harmful effects.

On the other hand, if ozone levels rise above certain concentrations, they can close the stomata so they take up less carbon dioxide. Limiting uptake of carbon dioxide would inhibit photosynthesis in the plant even more.

But the authors note that there are uncertainties involved in how specific plant species respond to increases in the two gases.

If plants take up less carbon dioxide from the atmosphere, then levels of the greenhouse gas could build up more than is now expected, amplifying the predicted effects of global warming.

The study's findings also suggest that ozone, which is a greenhouse gas itself, may contribute more to global warming through its effects on the plant carbon sink than through any absorption and re-radiation of Earth's heat itself.