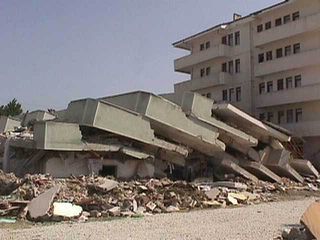 ANCHORAGE, Alaska — When forecasting the much-feared "Big One" — the next devastatingly large earthquake — scientists should look to the oldest parts of a dangerous fault, researchers said here today (April 30) at the annual meeting of the Seismological Society of America.

To pinpoint the earthquake risk from big faults, the kind that slice across hundreds of miles of Earth's crust, researchers examined 2,000 years of historical earthquakes on Turkey's North Anatolian Fault Zone. The largest earthquakes struck on the older, eastern section of the North Anatolian Fault, said lead study author Marco Bohnhoff, a seismologist at the GFZ German Research Center for Geosciences in Potsdam.

Geoscientists, Bohnhoff said, have argued for a relationship between fault age and earthquake size for decades, but it has never been confirmed with historical records. The research team also looked at more recent instrumental records, from earthquake monitors called seismometers to geologic studies of sudden earth shifts during past quakes. [In Photos: This Millennium's Most Destructive Earthquakes]

Older faults are more likely to unleash larger earthquakes, because they are smoother and better organized than their younger counterparts, said U.S. Geological Survey geologist David Schwartz, who was not involved in the study. This smoothness helps a fault unzip farther during an earthquake, releasing more damaging energy. For example, young faults are rough and may have several branches, or interlinked fractures, which limit earthquake size. Over time, repeated earthquakes smooth these rough surfaces and link up the fractures into one primary fault.

The North Anatolian Fault was born about 12 million years ago, when the Eurasian and Anatolian tectonic plates started sliding past one another. Today, the 745-mile-long (1,200 km) fault is one of the biggest strike-slip faults in the world, similar in length to California's San Andreas Fault.

Turkey's largest city, Istanbul, lies at the younger, western end of the North Anatolian Fault. The findings suggest the seismic hazard for Istanbul probably does not exceed an earthquake greater than magnitude 7.4, Bohnhoff told Live Science's Our Amazing Planet. However, the city is still at significant risk from future earthquakes because of non-earthquake-resistant building construction, Bohnhoff said.

"This is one more piece in better understanding the earthquake machine," Bohnhoff said. "Understanding where we can expect shaking can help us to build more stable buildings."