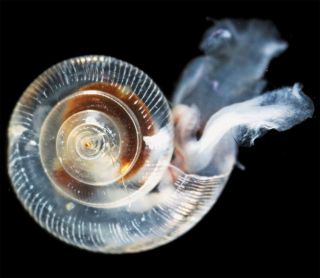 Ocean acidification — a phenomenon in which the world's oceans have become more acidic as they absorb higher levels of carbon dioxide from the atmosphere — is eating away at tiny marine snails, causing the shells of these so-called pteropods to dissolve, according to a new study.

Researchers identified what could be the first evidence of this troubling development in the waters off the west coast of the United States. In this region, the scientists estimate the percentage of snails impacted by ocean acidification has doubled since the dawn of the Industrial Revolution. With coastal waters projected to become 70 percent more acidic than preindustrial levels by 2050, the number of affected snails could triple, they added.

"Dissolving coastal pteropod shells point to the need to study how acidification may be affecting the larger marine ecosystem," study lead author Nina Bednarsek, a researcher at the National Oceanic and Atmospheric Administration's (NOAA) Pacific Marine Environmental Laboratory in Seattle, said in a statement. "These nearshore waters provide essential habitat to a great diversity of marine species, including many economically important fish that support coastal economies and provide us with food." [Amazing Mollusks: Images of Strange & Slimy Snails]

Pteropods, which typically grow to be less than half an inch (1.27 centimeters) in size and can be found in oceans around the world, are themselves a source of food for pink salmon, mackerel and herring, the researchers said.

Scientists have known that ocean acidification can wreak havoc on corals, mussels, oysters and other small marine creatures, particularly over long periods of time. But, the researchers were surprised by how many pteropods are already being impacted by acid levels in coastal waters.

"We did not expect to see pteropods being affected to this extent in our coastal region for several decades," study co-author William Peterson, an oceanographer at NOAA's Northwest Fisheries Science Center, said in a statement. "This study will help us as we compare these results with future observations to analyze how the chemical and physical processes of ocean acidification are affecting marine organisms."

The researchers sampled coastal waters along the west coast of the United States, and found that the highest percentage of pteropods with dissolving shells were located in a region stretching from northern Washington to central California. Within this swath, 53 percent of pteropods sampled had severely damaged shells.

The study researchers also tracked the movement of water during the coastal upwelling season, from April to September, when winds churn deeper water rich in carbon dioxide up to the surface.

"Acidification of our oceans may impact marine ecosystems in a way that threatens the sustainability of the marine resources we depend on," Libby Jewett, director of the NOAA Ocean Acidification Program, said in a statement. "Research on the progression and impacts of ocean acidification is vital to understanding the consequences of our burning of fossil fuels."

The detailed findings of the study were published online today (April 30) in the journal Proceedings of the Royal Society B.