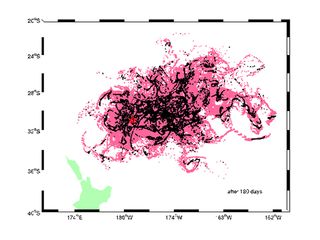 A map of pumice drift from the 2012 eruption of the Havre seamount 180 days after the eruption.
(Image: © Image courtesy the University of Southampton )

A computer model could help track rafts of floating rock in the ocean, perhaps giving scientists a way to warn ship captains to stay away.

The rock in question is pumice, which forms from rapidly cooled lava. The lava cools so quickly that gas bubbles are trapped inside, creating a rock filled with spongelike holes. Pumice is so light it can float.

The floating rock can occasionally cause problems. Island or undersea volcanoes can create massive amounts of pumice in a single eruption, resulting in huge rafts of rock that can float hundreds of miles. After the enormous eruption of Krakatoa in 1884, pumice rafts clogged harbors in Indonesia. Ships today are at risk, too, said study researcher Martin Jutzeler, a volcanologist at the University of Southampton in the United Kingdom. Water intakes on ships can become damaged by pumice, stalling the engine, Jutzeler told Live Science. [In Photos: A Floating 'Island' of Rocks]

An undersea eruption gave Jutzeler and his colleagues a rare opportunity to track rafts from a known source — and to use ocean models to see if computers could predict where pumice will float.

The researchers used moderate-resolution satellite imagery, as well as reports from ship captains and airline pilots, to track a pumice raft from the Havre Seamount, a submarine volcano in the southwest Pacific near New Zealand. The volcano erupted in 2012, creating a raft of pumice measuring 155 square miles (400 square kilometers) in a single day. It was the first concrete evidence that deep-sea volcanoes, not just shallow ones, can create pumice rafts, Jutzeler and his colleagues wrote Wednesday (April 23) in the journal Nature Communications.

The researchers used an ocean model called the Nucleus for European Modeling of the Ocean (NEMO) — which pulls together information on currents and wind from 1988 to 2010 — to see if they could match a simulated pumice raft with the Havre "floating island." They found that, using the model, they could create near-real-time forecasts of where the pumice — which tended to spread into long tendrils bobbing in the currents — would head next.

These findings could be useful for ocean navigation, Jutzeler said. Currently, nine Volcanic Ash Advisory Centers around the globe monitor the skies for airborne volcanic ash for the safety of air traffic.

"The Volcanic Ash Advisory Centers are very competent now to be able to track atmospheric particles, but nothing exists for these rafts," Jutzeler said. "We really feel that something should be done."

Havre's eruption was in the "middle of nowhere," he said, so nobody was affected. But other eruptions could hit closer to population centers or shipping routes, and terrestrial eruptions of island volcanoes could also send rafts of pumice into the sea.

The research also has a scientific application. Geologists use ash beds from volcanoes to date layers of rock. But there is little understanding of how pumice rafts and their associated ash eventually sink to the seafloor and become part of the rock record, Jutzeler said.

Next year, Jutzeler and his colleagues will use submersibles to explore the products of volcanic eruptions, he said.

"We'll try to understand what got created, but also what didn't make it into the raft and fell down to the seafloor," Jutzeler said.