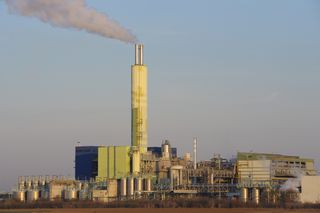 People have responded with outrage over the news that aborted fetuses were routinely burned at an incinerator in Oregon that used medical waste to generate electricity.

"We're going to get to the bottom of it," Janet Carlson, commissioner of Marion County, Ore., told the Associated Press. "I want to know who knew, when they knew, how long they had known this was going on."

The issue, however, isn't limited to one incinerator in Oregon: Aborted fetal tissue and other types of medical waste — amputated limbs, organs, cancerous tissue, bones and all manner of bodily fluids — are routinely burned for heat or electricity worldwide. [8 Grisly Archaeological Discoveries]

In March, the British public was shocked to learn that the bodies of thousands of miscarried and aborted fetuses had been incinerated, along with other waste, to heat hospitals.

"This practice is totally unacceptable," said Dr. Dan Poulter, minister of the U.K. Department of Health, as quoted in The Telegraph. The incineration of fetal tissue was immediately banned at all National Health Service (NHS) hospitals.

But in fact, the practice is totally acceptable by many government agencies worldwide (Poulter's indignation notwithstanding), and is even mandated in dozens of state health codes as a way of managing potentially hazardous and infectious medical waste.

In Texas, the health code allows for the disposal of human tissue or fetuses by seven legal means, including incineration, "disinfection followed by deposition in a sanitary landfill" and "grinding and discharging to a sanitary sewer."

In North Carolina, health care facilities "shall dispose of fetal remains by burial, cremation or incineration," per state regulations.

South Dakota stipulates that "any hospital, clinic or medical facility in which abortions are induced or occur spontaneously or accidentally … shall arrange for the disposal of the remains by cremation, interment by burial or by incineration in a medical waste incinerator approved by the Department of Environment and Natural Resources."

And because many states and cities now use waste as an eco-friendly source of energy, medical waste (including body parts and fetal remains) is combined with household garbage and other types of waste to create heat or electricity.

The fetal remains incinerated in Oregon had come, in part, from Canada, and were hauled into Oregon by the waste management firm Stericycle, AP reports.

Marion County Commissioner Sam Brentano said the county would soon rewrite its ordinance to exclude all fetal tissue from its incinerator, while other medical waste will still be accepted, according to the AP.

"So if someone loses an arm, loses a finger?" Carlson asked at a recent meeting of Marion County commissioners, according to the AP.

"That should go in and be burned," Brentano answered. "As gross as that is."