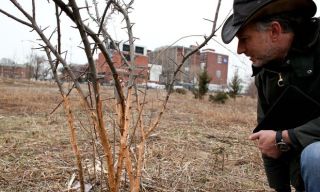 By now, most of North America has thawed out from a brutal winter that introduced unhappy phrases such as "polar vortex" into the lexicon.

But some effects of the long-lasting, subfreezing temperatures are only now becoming apparent. One surprise was the discovery that starving rats in New York City had attacked the trees in urban parks for sustenance.

"With the deep snow and the cold winter, probably they didn't have access to the normal food supply and it was a lot colder this winter," Rich Hallett, a research ecologist with the U.S. Forest Service, told WNYC. "So they went after the trees." [6 Invasive Pests Threatened by Cold Weather]

The trees — which even in winter have some carbohydrates (mostly sucrose) in the vascular tissue beneath their bark — had been gnawed by rats all the way around the base of the trunk, a practice called "girdling" that usually kills a tree.

In addition to rats, a number of other pests had a rough time during the winter of 2013-2014, which broke records for cold from New England to the Midwest.

"I'm probably one of the few people that really roots for an extremely cold day, because I really do think it helps with some of the major insect problems that we have," Robert Venette, a biologist with the U.S. Forest Service in Minnesota, told NPR.

Invasive insects such as the emerald ash borer (Agrilus planipennis) and the hemlock wooly adelgid (Adelges tsugae), both of which have decimated native tree populations in the Northeast, may have had their march across America slowed or halted by extended periods of cold weather.

"Given that temps have gotten really cold, and not for one night but for an extended period, there's a tendency for a lot of people to hope for insect mortality," Deborah McCullough, a professor of entomology and forestry at Michigan State University in East Lansing, told the Capital News Service (CNS).

Other invasive pests vulnerable to subzero temperatures include the southern pine beetle (Dendroctonus frontalis), the brown marmorated stinkbug (Halyomorpha halys) and several species of ticks (Ixodes sp.), which can transmit Lyme disease and other illnesses.

The population of Norway rats (Rattus norvegicus), whose numbers are almost wholly dependent on humans for food, may drop somewhat this year as a result of wintry blasts.

"If the snow gets really deep, and it's hard for young rats to jump across the snow and get to the food, then cold temperature might actually cause some mortality," urban ecologist Steve Sullivan of the Peggy Notebaert Nature Museumin Chicago told Fox News Chicago.

But urbanites who are hoping that last winter's unusually bitter weather resulted in a rat Armageddon may be disappointed. Sullivan doesn't expect a major die-off from cold for a tough, smart animal like the rat.