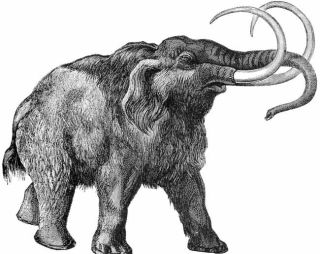 Drawing of a woolly mammoth. These beasts were bigger than mastodons and had curved rather than straight tusks. Most died off around 10,000 years ago.
(Image: © Stephan Shuster Lab, Penn State)

When 8-year-old Olivia McConnell proposed that her state, South Carolina, adopt a state fossil, she may not have expected her request to prompt a drawn-out fight with creationists in the state legislature.

In letters to her local representatives, Olivia asked that the woolly mammoth be made the official state fossil, because mammoth teeth dug up by slaves in a South Carolina swamp in 1725 were among the first vertebrate fossils discovered in North America.

Her senator, Kevin Johnson, told CBS News this week that he thought a bill honoring the request "would just fly through the House and through the Senate." But the bill is currently languishing in the House, months after it was proposed in January, because some lawmakers with creationist beliefs have objected on religious grounds.

The original text of the bill simply read: "The woolly mammoth is designated as the official state fossil of South Carolina."

In its most recent iteration, which was shot down in a vote on April 9, the bill had been amended to read as follows:

Olivia is determined to see her proposal enacted.

If South Carolina adopts a state fossil, it would join a majority of other U.S. states that have their own ancient emblems — many of which are far older than the Columbian mammoth, which went extinct some 12,500 years ago. The 150-million-year-old Stegosaurus represents Colorado; New York has Eurypterus Remipes, a 400-million-year-old extinct sea scorpion relative; and Triceratops, which roamed Earth 68 million years ago, is the mascot for South Dakota.