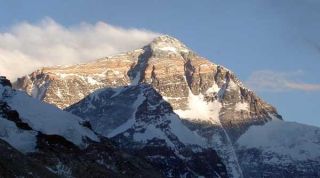 Each spring, amidst stories of successful firsts, come tales of overcrowding, fighting and tragedy on Mt. Everest, including last week’s avalanche that killed at least 13 Sherpas who were setting ropes on the mountain’s most popular climbing route.

Nevertheless, hundreds of people from dozens of countries are at Base Camp right now, and many are planning to make a bid for the summit of the world’s tallest peak in the next few weeks, though those bids may be complicated by news that Sherpas have decided to vacate the mountain for the season. Why does Everest continue to be so alluring, despite the costs, the crowds and the risks?

The answer likely differs for each climber, and studies suggest that people who take risks tend to perceive them differently from people who avoid the same behaviors. But for adventurers who are drawn to Everest, the mountain’s top is a lifelong dream that inspires intense preparation and a deep sense of reverence.

“I can wax poetically for hours about this, but I thoroughly love the mountain,” said Alan Arnette, a mountaineer and respected Everest blogger based in Fort Collins, Colo. “It represents the ultimate, the pinnacle for many people.

“I think Everest is a magical mountain with magnetic qualities,” he added. “It’s like a light to bugs that attracts people once they hear about it.”

The modern urge to climb Everest began more than 150 years ago when British surveyors determined that the 8,848-meter peak was the tallest in the world. Everest soon became a “third Pole” as explorers raced to become the first to stand on top of it.

“From the moment it was identified as the highest mountain, it became an object of fascination,” said Maurice Isserman, a historian at Hamilton College in Clinton, New York, and author of "Fallen Giants: A History of Himalayan Mountaineering from the Age of Empire to the Age of Extremes."

When asked by The New York Times why he wanted to climb Everest, British mountaineer George Mallory, who died on the mountain during his third expedition there in 1924, famously answered, “Because it’s there.”

Not everybody wants to climb Everest, though, and those who do likely have a strong internal drive to seek out thrills that may be at least partially programmed by genetics, said Andreas Wilke, a psychologist at Clarkson University in Potsdam, N.Y. Decision-making studies show that some people are more likely to pursue or avoid risk than others.

But the spectrum of risk-taking behavior is broad and more complex than psychologists once thought. In his studies of people who engage in extreme recreational activities like bungee jumping and SCUBA diving, Wilke has met skydiving wallflowers and chain-smokers who buy extensive car insurance. People who pursue risks in some parts of their lives, in other words, don’t necessarily live on the edge in every way.

Instead, when Wilke has asked people to evaluate their behaviors, he finds that they often don’t consider what they do to be as risky as it might seem to others, either because they have a skill set that gives them confidence or because in their minds, the benefits outweigh any fear involved. That balance of risks and rewards differs from person to person.

“I would not climb Everest. I have other things to do, but in plain English, I’m also too scared to do it,” Wilke said. “But I would do things some mountain climbers would not do, like lecture to 500 undergraduates.”

From an evolutionary perspective, Wilke said, risk-taking behavior can be advantageous, particularly in men, because it signals strength and fitness to members of the opposite sex. In line with that theory, a successful Everest climb can convey status and prestige.

“If you said you went to Everest, you by definition climbed the highest mountain available to mankind,” he said. “That’s a very clear, non-fakable hierarchy. We can be very competitive in nature.”

Have Sherpas Had It?

For many people who have topped Everest, though, it’s about much more than hubris. Surpassing the “death zone” above 8,000 meters, standing on top of the world and returning home safely is an experience unlike any other.

“It brings into focus what’s important to you,” said Arnette, who summited Everest on his fourth attempt in 2011. “There are a thousand reasons to turn around and only one to keep going. You really have to focus on the one reason that’s most important and unique to you.

“It forces you to look deep inside yourself and figure out if you really have the physical, as well as mental, toughness to push when you want to stop,” he added. “When you come home, you realize you are able to face a wall and overcome that wall.”