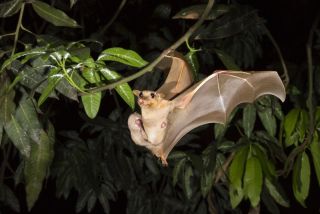 Bats' ability to fly may protect them against becoming ill with a range of viruses known to be deadly to humans, including Ebola and rabies, according to a new hypothesis.

In recent years, a number of new diseases that have caused severe illnesses in people have been traced back to bats. Bats are the suspected source of severe acute respiratory syndrome (SARS) virus, Ebola, Marburg virus, Hendra virus, and most recently Middle East Respiratory Syndrome (MERS) virus, to name a few.

In fact, bats are reservoirs formore than 60 viruses that can infect people, according to a 2013 study. The animals host more viruses per species than rodents. [5 Most Likely Real-Life Contagions]

According to the new hypothesis, flight may be the key factor in preventing the animals from falling ill, despite carrying so many viruses.

When they fly, bats increase their energy expenditure (metabolic rate) and body temperature, resulting in body temperatures similar to those seen in other mammals that have a fever (100 to 105 degrees Fahrenheit), the researchers said. This suggests that flight protects bats from infection in the same way that fever protects mammals — by boosting their immune response, the researchers said.

If the high metabolic rates and high body temperatures that accompany flight activate the immune system, then flight could be the ultimate explanation "for the evolution of viral infections without overt signs of illness in bats," the researchers wrote in a paper in the May issue of the journal Emerging Infectious Diseases.

"Daily high body temperatures [from flying] thus might arm bats against some pathogens during the early stages of infection," they said.

Some viruses may have evolved with bats to be more tolerant of higher body temperatures. Although these viruses aren't harmful to bats, they could cause disease when they cross over to other animals, as the viruses would be able to survive a wider range of temperatures, the researchers said.

Still, researchers won't know whether the hypothesis is true until they test it. One experiment would be to examine the immune response of bats at rest and after flying, and look at whether the immune response to viruses is stronger after flight, according to the paper, from researchers at the U.S. Geological Survey in Fort Collins, Colo., and the Zoological Society of London, among others.