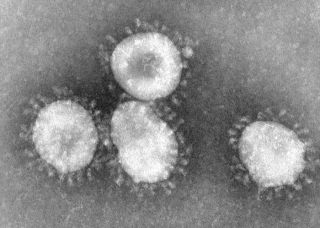 Coronaviruses, the family of viruses to which SARS belongs, are a group of viruses that have a crown-like (corona) appearance when viewed under an electron microscope.
(Image: © CDC/ Dr. Fred Murphy)

The severe acute respiratory syndrome (SARS) virus — which caused a pandemic in 2002 and 2003, killing more than 750 people worldwide — likely originated in horseshoe bats in China, according to a new study.

The researchers identified two new SARS-like viruses (called coronaviruses) in the bats that are very similar to the SARS virus that infects people.

Although SARS-like coronaviruses have been isolated from bats in the past, which suggested the animals were the origin of the human pandemic, these viruses were still too different to be considered the "ancestors" of SARS. [5 Most Likely Real-Life Contagions]

Troublingly, the study suggests that SARS-like viruses can spread directly from bats to people, instead of going through another animal first, as was previously thought.

The SARS-like virus identified in the study could infect human cells through the same cell receptor that it uses to infect bats.