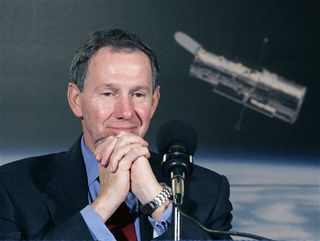 NASA sought today to deflect criticism its chief received following skeptical comments he made on the topic of the agency's role in global warming research.

During an interview Wednesday with NPR, NASA Administrator Michael Griffin expressed doubts that global warming was an issue that humans could or should address.

In a telephone interview today, NASA spokesman David Mould told LiveScience that climate is an important issue about which the agency provides a significant quantity of data, and that it will continue to provide that data, but that NASA's job is not to make policies or advise on policies.

"NASA is the world's preeminent organization in the study of Earth and the conditions that contribute to climate change and global warming. The agency is responsible for collecting data that is used by the science community and policy makers as part of an ongoing discussion regarding our planet's evolving systems. It is NASA's responsibility to collect, analyze and release information. It is not NASA's mission to make policy regarding possible climate change mitigation strategies. As I stated in the NPR interview, we are proud of our role and I believe we do it well."

Griffin's comments to NPR's Morning Edition included: “I have no doubt that global—that a trend of global warming exists. I’m not sure it’s fair to say that is a problem we must wrestle with.”

He further stated that it is wrong for mankind to say what climate conditions are best for the planet.

“To assume that [global warming] is a problem is to assume that the state of the Earth’s climate today is the optimal climate, the best climate that we could have or ever have had and that we need to take steps to make sure it doesn’t change,” he said. “First of all, I don’t think it’s within the power of human beings to assure that the climate does not change, as millions of years of history have shown.”

“Second of all, I guess I would ask which human beings—where and when—are to be accorded the privilege of deciding that this particular climate that we might have right here today, right now, is the best climate for all other human beings. I think that’s a rather arrogant position for people to take.”

Anthony Kreindler, a spokesman for Environmental Defense, an environmental rights organization, today agreed in part with NASA's clarification: “It’s not within NASA’s responsibility to make policy,” he said.

But he disagreed with Griffin’s earlier remarks.

“To suggest that we can’t do anything to fix the climate change problem is a direct [refutation of recent IPCC findings],” he told LiveScience. “I think it’s just ignoring the scientific consensus.”

Gavin Schmidt, a climate scientist with NASA’s Goddard Institute for Space Studies responded via email to a request from LiveScience to comment on the NASA chief's remarks to NPR: “Griffin's comments seem surprisingly naive. We are not in a situation where we are shopping around for an ideal climate, but that we have adapted to the climate we have, and that therefore large changes to it are not likely to be beneficial.”