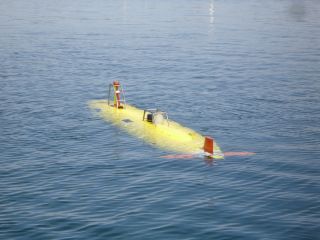 As the search for missing Malaysia Airlines Flight 370 continues, robot submersibles will likely be employed to scour the pitch-black ocean floor for signs of wreckage.

Autonomous underwater vehicles, or AUVs, located Air France Flight 447 two years after it crashed in the southern Atlantic Ocean in 2011, and will probably be used to look for the missing Malaysian Airlines jet, if authorities can narrow the search area, scientists say.

The Australian search vessel looking for the plane has an AUV onboard. The AUV, made by Bluefin Robotics Corp. of Boston, Mass., and operated by Phoenix International, will probably be deployed soon, said David Gallo, director of special projects at The Woods Hole Oceanographic Institution (WHOI), which led the search for the missing Air France flight.

"We're a month into [the search], and it's kind of surprising that one month in is the first time they've put something into the water," Gallo told Live Science. WHOI has offered its help in finding Flight 370, but has not been involved in the search so far.

But Gallo also said he's confident the plane will ultimately be found. "There's not a stitch of doubt in my mind that this is a solvable problem." [Malaysia Flight 370: Facts & Timeline]

The Beijing-bound flight disappeared 94 minutes after taking off from Kuala Lumpur International Airport on March 8. The flight's disappearance has launched perhaps the largest international search effort ever, and the aircraft's fate remains unknown.

No debris from Flight 370 has been located yet, but the plane's last-known location suggests it likely crashed in the southern Indian Ocean, to the west of Australia.

To look for the plane, the robotic vehicles will use sonar, because the water is much too deep to see at those depths. The Bluefin submersible is rated for a depth of only about 15,000 feet (4,500 meters), Gallo said, but other submersibles can go deeper.

Complicating the search is that the Indian Ocean has some of the roughest seas in the world, which could make it difficult to launch and retrieve the submersibles.

"The Indian Ocean's surface conditions would be an added challenge for any autonomous underwater vehicle launch and recovery, and possibly for towed sonar systems," Mike Purcell, the WHOI principal engineer who co-led the search for the Air France flight, said in a statement.

Still, the seafloor in the Atlantic where the Air France plane was found is much more rugged, and had never been mapped before, so it's tough to compare the two searches, Gallo said.

Finding debris from the Malaysia Airlines jetliner could help narrow the search area. News outlets initially reported that hundreds of objects had been found in the search area, but none of these turned out to be from the missing airplane.

If debris is found, scientists could track where the debris came from using computer models based on the last-known position of the plane, and ocean winds and currents. The models can estimate the debris path for the previous 16 days fairly accurately, but as more time elapses without finding debris, the margin of error in the models grows, scientists said.

The underwater terrain could also play a role in how long the search takes. If the plane settled in a flat area, it will be easier to identify than if it came to rest in rough terrain. If sonar data finds potential wreckage, the subs will take pictures to confirm it.

Gallo said that one thing he learned from the Air France search was the value of having one ship, with one team, focused on the goal of finding the aircraft.

"We have to find the plane, not just for the families and loved ones, but for the flying public and the aerospace industry," Gallo said.