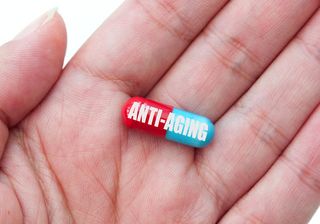 Call it anti-anti-aging therapy. It turns out that injections of growth hormone — a staple of anti-aging, hormone-replacement therapy — may have the opposite effect as intended, thwarting a person's quest to live to an advanced age.

In an ongoing study of very old people, those in their 90s with naturally low levels of human growth hormone appear to have a far better chance of living into their 100s compared with people who have above-average levels of the hormone.

In other words, juicing yourself up with growth hormones as an anti-aging strategy might backfire, undermining the body's natural defenses against the diseases of old age, according to researchers at Albert Einstein College of Medicine in New York.

Their study appears in the April issue of the journal Aging Cell.

The billion-dollar anti-aging hormone-therapy industry is based on a simple premise: Levels of various hormones decrease significantly as adults hit middle age; so replenishing youthful levels of those hormones should make graying adults look and feel younger. The primary hormones administered through anti-aging clinics are human growth hormone (HGH), which prompts the body to make another hormone called insulin-like growth factor 1 (IGF-1), and dehydroepiandrosterone (DHEA), a precursor of estrogen and testosterone.

This industry traces its roots to a 1990 New England Journal of Medicine study, in which 12 men over age 60 were given shots of growth hormone. The men experienced a modest increase in muscle mass and bone density, and a decline in body fat. To some entrepreneurs, that meant "anti-aging," and they have repackaged the study that way ever since. [Extending Life: 7 Ways to Live Past 100]

But the treatment came with side effects and myriad unknowns. First, author Dr. Daniel Rudman remained adamant until his death that his study had no implications for anti-aging. In 2003, the NEJM published an editorial lashing out at the anti-aging industry for citing Rudman's study so prominently in their advertising. "If people are induced to buy a 'human growth hormone releaser' on the basis of research published in the Journal, they are being misled," the editorial stated.

Administering HGH is illegal unless the patient has low levels of the hormone; however, this diagnosis is subjective, which enables some clinics to prescribe the treatment to those who don't need it.

Studies have since shown that using HGH, estrogen and other hormones can lead to cancer, cardiovascular disease, joint problems and other ailments. Now the new study finds that low IGF-1 levels might be a benefit, a predictor of exceptionally long life.

In the new study, researchers followed 184 men and women in their mid-90s for up to 11 years. Strikingly, the chance of living through the length of the study depended mostly on the participants' blood levels of IGF-1. Every 1-nanogram per milliliter decrease in IGF-1 translated into about one more week of life.

"In light of insufficient scientific evidence [that] HGH in older adults offers long-term anti-aging benefits, and with studies indicating that low growth hormone levels may actually protect the elderly from aging diseases … the risks of using HGH as an anti-aging strategy outweigh the potential benefits," said Dr. Sofiya Milman, lead author of the new study and an assistant professor of endocrinology at Albert Einstein.

Previously, this research group, led by Dr. Nir Barzilai, director of the school's Institute for Aging Research, found that many centenarians have a mutation that keeps their IGF-1 levels naturally below average. Moreover, mice can live significantly longer — and ward off cancer — when they are resistant to the effects of growth hormone.

The new study coincides with another recent study in the journal Cell Metabolism, which suggested a benefit of lower IGF-1 levels for middle-age adults. That study found that people ages 50 to 65 who consumed large amounts of animal protein had high IGF-1 levels, a four-fold increase in cancer death risk and a 75-percent increase in overall mortality over the 18-year study period.

Dr. Andrzej Bartke, an expert on hormonal and genetic influences of aging at the Southern Illinois University School of Medicine, said he was impressed by the new study, calling it "interesting, important and timely."

However, the relationship between growth hormone, IGF-1, life expectancy and disease is "very complex," Bartke said. Some previous studies have shown that low IGF-1 levels are associated with an increased risk of cardiovascular disease, he said.

Bartke noted that the participants in the new study with low IGF-1 also had low blood sugar levels, which is counterintuitive based on early studies, and may be yet another factor to help explain their longevity.

The Endocrine Society, a professional medical organization, maintains that growth hormone therapy offers benefits in body composition, exercise capacity, skeletal integrity and quality-of-life measures, and is most likely to benefit those patients who have more severe HGH deficiency.

"Growth hormone administration causes 'melting' of fat and tightening of skin, so one may look better," Milman told Live Science. "It may be beneficial for maintaining a 'Hollywood kind of longevity' but would not serve the public good, in general, as an anti-aging strategy."

Follow Christopher Wanjek @wanjek for daily tweets on health and science with a humorous edge. Wanjek is the author of "Food at Work" (International Labor Office, 2005) and "Bad Medicine" (Wiley, 2007). His column, Bad Medicine, appears regularly on Live Science.