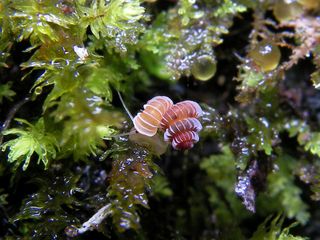 They look like ethereal little beings from another planet, but they're actually newly discovered species of snails. And unfortunately, some of them are already going extinct.

A team of biologists catalogued 31 species of the snail genus Plectostoma from Malaysia, Sumatra and Thailand, 10 of which were new to science. But the snails live on limestone hills mined by cement companies, which threaten to destroy the snails and their habitat along with them.

Dressed in shells of neon orange, lilac and crimson, the snails dazzle the eyes. "They flaunt all shell-coiling rules, by having very irregularly coiled and ornamented shells, making them look like microjewelry," said study researcher Thor-Seng Liew of Naturalis Biodiversity Center in Leiden, The Netherlands. [Photos: Gorgeous Neon Malaysian Snails]

Liew and his colleagues imaged the shells using a micro-CT scanner, a device that produces 3D X-rays of tiny objects.

The snails live only on limestone hills, which are rare in Southeast Asia, so each snail colony is isolated from the others. As a result, many of the species are endemic to a single hill.

This narrow habitat means that when mining companies quarry the hills for cement, they can destroy entire species of snail. The species Plectostoma sciaphilum already went extinct when its hill was mined around 2003. At least six other snail species face similar threats; for instance, P. tenggekensis, one of the species found in the study, may be gone by the end of 2014, the researchers said.

To raise awareness about these exquisite invertebrates, the researchers named some of the new species after conservationists and politicians who have supported preservation of the hills these snails call home (for example, Plectostoma whitteni was named after Tony Whitten, a former senior biodiversity specialist for the World Bank and the current regional director for Asia-Pacific Fauna & Flora International).

All of the species are described today (March 25) in the journal ZooKeys.

Editor's Note: This article was updated at 11:51 am ET March 25 to include information about the naming of Plectostoma whitteni.