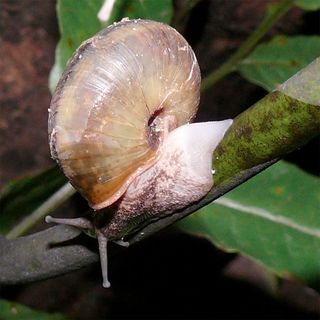 The land snail Satsuma caliginosa sheds its "tail" (or foot) to escape a snake predator. Here, the snail is regenerating its tail.
(Image: © © Dr Masaki Hoso)

Better to lose your foot than your life, at least if you're a snail.

In a move reminiscent of certain lizards that can voluntarily detach their tails, young Satsuma caliginosa snails self-amputate their foot when attacked by their nemesis, the Pareas iwasakii snake, a new study finds. As they age, though, the snails grow out of this sacrificial defense strategy, preferring to build up their shells as a less-disruptive survival tactic.

S. caliginosa is a brown-shelled land snail that lives on the Japanese islands of Ishigaki, Iriomote and Yonaguni. The first two of these islands also host the snail-eater P. iwasakii.

Adult S. caliginosa have shells with armored openings. The hole from which the mollusk's body emerges is built up with extra material, making it tough for snakes to extract the snail once it retracts inside. But young snails can't build up this extra armor because they have to finish growing their shell to maturity first. That leaves them vulnerable to P. iwasakii.

Previous research has already found that P. iwasakii has an easier time nabbing snails with clockwise-spiralling shells, so some S. caliginosa have actually evolved shells that twist the other way, providing them some protection. [Images: Amazing Mollusks]

Now, new research published today (Oct. 2) in the journal Proceedings of the Royal Society B finds that, to compensate, a young snail will sacrifice its foot to an attacking snake. The foot is the part of the body that the snail uses to get around; it looks more like a tail slithering along the ground than an actual foot.

Masaki Hoso, a researcher at the Naturalis Biodiversity Center in the Netherlands, combined field observations of S. caliginosa with laboratory experiments in which he exposed the snails to snakes. He found that about 60 percent of snails survive snake attacks, about half of them by pulling away from the snakes' needle-sharp teeth. But in 45.4 percent of cases, the snails self-amputated their feet, allowing the snake a distracting snack while they lived to see another day.

Older snails were less likely to drop their foot than younger snails, probably because self-amputation is a costly adaption: It takes snails about a month to regrow the lost foot. Nevertheless, Hoso was able to recapture more snails with regrown feet in the wild than snails with original feet, suggesting that self-amputation doesn't increase the snails' death rate in the long run.