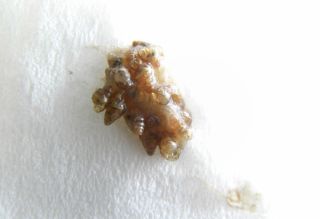 Tiny snails can actually benefit from being eaten by birds, according to a new study that found about 15 percent of the snails eaten by two species of bird survived their journey through the birds' guts and out the other end.

The birds appear to spread the snails they have eaten via excrement, allowing the mollusks to travel much greater distances than they could crawling on their own, according to the researchers led by Shinichiro Wada of Tohoku University in Japan.

The researchers tested out their hypothesis by feeding 174 snails, a species called Tornatellides boeningi, to four omnivorous birds —three Japanese white-eyes and one brown-eared bulbul —that also prey upon them in the wild on the Japanese Ogasawara Islands. [Album: Lost Predators Leave Broken Food Chains]

It took 30 to 40 minutes for the snails, all adults with shells about 0.1 inches (2.5 millimeters) high, to pass completely through the birds' digestive systems. An examination of the bird droppings revealed that 14.3 percent of the snails that had passed through the white-eyes' guts and 16.4 percent of those that traveled the brown-eared bulbul's guts were still alive. Snails that had not moved within 12 hours were considered dead.

The researchers also found genetic evidence indicating that birds may unintentionally disperse the snails. Gene flow appeared high among snail populations in different locations; in addition, they found a positive correlation between the genetic diversity of snail populations and the density of Japanese white-eyes on Hahajima Island.

While it is well-known that plants can spread their seeds around through bird or other animal droppings, it is rare for animals to employ this strategy. The eggs of zooplankton — tiny floating animals in the ocean — can pass through fish unharmed, and birds can also spread wasp larvae. Pond snails that can survive transit through the fish or ducks that eat them are the only other known examples of adult animals dispersing this way, the authors write in the Journal of Biogeography.