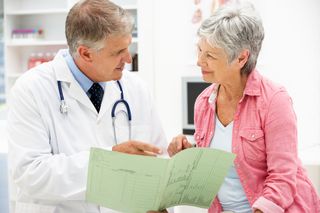 Hormone replacement therapy, also called menopausal hormone therapy, is a treatment for the symptoms of menopause, such as hot flashes and vaginal dryness that occur around the time a woman stops having her period. Although the treatment can provide benefits, it has also been linked to serious risks, such as an increased risk of breast cancer, and so women should speak with their doctor about whether the treatment is right for them.

Menopause, or the cessation of a woman's monthly period, is a natural part of aging and usually occurs in a woman's 40s and 50s. During menopause, levels of the hormonesestrogen and progesterone decline, leading to symptoms such as night sweats, hot flashes and mood changes.

During hormone replacement therapy (HRT), women take medications to replace these hormones. Women who have a uterus generally take estrogen and progesterone (or the synthetic hormone progestin) together. This is because taking estrogen by itself is linked with an increased risk of endometrial cancer (cancer of the uterus lining), according to the National Cancer Institute.

Women who do not have a uterus (because they've had a hysterectomy) generally take estrogen by itself.

HRT medication usually comes in a tablet to be taken by mouth every day. Depending on the purpose for taking HRT, a doctor may instruct a woman to start with a low dose of estrogen and increase it slowly.

Estrogen can be prescribed for the prevention of bone loss (osteoporosis), but doctors usually prescribe other medications for this purpose, according to the Mayo Clinic.

About a decade ago, a large study by the Women's Health Initiative, part of the National Institutes of Health, found that HRT that included estrogen and progestin increased the risk of breast cancer by about 25 percent in postmenopausal women. The risk may be higher for women who take the hormones for longer periods.

The treatment can also make breast cancer harder to detect on mammograms, according to the Mayo Clinic.

HRT may also increase the risk of blood clots, stroke and gallbladder disease during the treatment period. Some studies suggest an increased risk of heart disease, particularly for older women.

The Office of Women's Health points out that there are symptom-specific treatments available for women during menopause, which may allow for relief without having to take hormone replacement therapy. They include antidepressants, medicine for epilepsy and blood pressure, and a large array of home remedies.

The National Institutes of Health has stated that if women decide to receive HRT, they should take the lowest dose for the shortest amount of time, and be re-evaluated every six months to see if they still need the treatment.

According to the Department of Health and Human Services' Office of Women's Health, women should not take HRT if they've had certain kinds of cancer, such as breast or uterine cancer, have had a heart attack, stroke or blood clots, have problems with vaginal bleeding, have heart disease, or may be pregnant.

They also recommend that women call their doctors if they experience any of the following side effects: