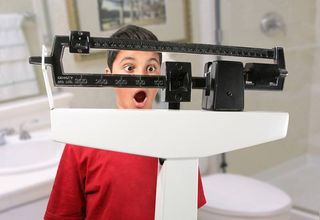 Children whose parents are controlling and don't communicate well with their sons and daughters may be more likely to be obese, a new study finds.

Researchers found that children ages 2 to 5 whose parents set strict limits, without allowing much dialogue or showing much affection, were 30 percent more likely to be obese than their peers whose parents were affectionate and had discussions about behavior with their children.

And for kids ages 6 to 11, those with stricter parents had a 37 percent higher chance of being obese than kids whose parents were affectionate and communicated well with their children.

The researchers also found that poverty contributed to an increased child obesity risk. However, regardless of a family's income level, parenting style still seemed to influence the obesity risk in kids. [10 Scientific Tips For Raising Happy Kids]

"Even if you control for the poverty, the parenting style can still make a difference," said study author Lisa Kakinami, an epidemiologist at McGill University in Montreal.

In the study, the researchers used data from the National Longitudinal Survey of Children and Youth, a survey conducted every two years that examined the BMIs (body mass indexes) of kids ages 11 and under in Canada. The data were gathered from 1994 through 2008.

The findings show the importance of good communication with kids, the researchers said.

On the other hand, authoritarian parents often fail to explain to their kids the rationale behind a punishment or a rule. These parents may have more control over their child, but they don't explain to the child why that control is there, Kakinami said.

This lack of explanation makes it hard for kids to learn to regulate their own behavior, including their choices of what to eat. For instance, if parents allow their children to eat only a specific amount of a certain snack without explaining why, "the child does not learn to stop eating when they are full," she said. However, further research is needed to confirm the relationship between these ideas, Kakinami noted.

But establishing rules is still important, she said. "Children thrive under these boundaries, as long as you can explain to the child and discuss with the child why these boundaries are put in place," Kakinami said.

"The study makes it clear that some parenting styles are better than others in terms of helping their children avoid becoming overweight and obese," Dr. Stephen R. Daniels, a pediatrician, professor at the University of Colorado and spokesman for the American Heart Association, said in a statement.

It is also important that the study recognizes a relationship between poverty and obesity in kids, said Daniels, who was not involved in the study.

The study was conducted in Canada, but the findings are likely to apply to U.S. children, too, he said.