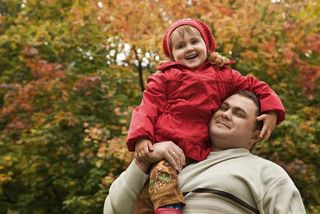 A poll by Children's Mercy Hospital and Clinics in Kansas City, Mo. finds that parents rate themselves as the most important influence on their child's weight. But parents may also underestimate how important it is to see a doctor about weight problems in kids, the results showed.
(Image: © Losevsky Pavel, Shutterstock)

More than one in six American children and teens are obese, but a new poll suggests that parents and doctors don't always see eye-to-eye on the seriousness of the obesity epidemic. According to the new report, only about half of parents believe it is "very important" to seek medical care for an overweight child.

In contrast, medical professionals say it's important to stay on top of a child's weight.

"It's not just a cosmetic issue," said Sarah Hampl, the medical director of Weight Management Services at Children's Mercy Hospital & Clinics in Kansas City, Mo. "There are medical and psychological complications that are occurring in these kids, and with increasing frequency into their adult years."

The results don't imply that parents don't care about obesity in children; in fact, they were more likely than nonparents to endorse public policies to combat obesity, including requiring insurance to cover treatment and strengthening regulations of food advertisements to kids.

About 18 percent of kids under the age of 19 are obese, according to the Centers for Disease Control and Prevention. In adults, obesity is marked by a body mass index (BMI) of 30 or greater. But BMI, a measure of fatness based on a ratio of height and weight, isn't as straightforward in growing children, so doctors use BMI-for-age growth charts to monitor obesity. [Read: 8 Reasons Our Waistlines Are Expanding]

To gauge parents' perceptions of childhood weight problems, Children's Mercy Hospital contracted with a polling firm to conduct a survey with a nationally representative sample of 2,179 American adults, 728 of whom were parents. Hampl prepared some of the questions for the survey.

But parents weren't unconcerned with childhood obesity. Though they didn't all rate it as "very important," 82 percent of parents did say they would seek medical help for an overweight child. This was, however, less than the 94 percent who said they'd seek medical help for a child with a condition that would limit their life expectancy and the 93 percent who said they'd seek help for a childhood condition that would lead to later health care costs. Childhood obesity does both, Hampl pointed out.

"Obesity is likely going to limit a person's life expectancy and increase their future health care costs," she said. "So for us, it was a realization that we need to help parents better understand that childhood obesity does track into adulthood."