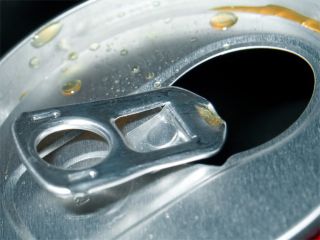 Why Do Soft Drinks Go Flat?

Should soda be taxed? Vote below.

Among the junk food contributing to runaway obesity in America is soda. It's not rocket science: If you drink a lot of sugar — most popular sodas contain more than 3 tablespoons of sugar — you'll get fat and your overall health will decline.

A study last month found that liquid calorie intake — specifically sugar-sweetened beverages — had a stronger impact on weight than solid calorie intake. A study in the journal Pediatrics in 2006 showed a direct correlation between weight gain in teenagers and the consumption of soda and other sugary drinks. Many other studies make similar links.

Meanwhile, obesity is a risk factor for diabetes, an increasingly common and incredibly expensive disease to treat.

Research reported at national meeting of the American Chemical Society in 2007 found that soft drinks sweetened with high-fructose corn syrup may contribute to the development of diabetes, particularly in children.

Lawmakers may soon ponder the possibility of a federal excise tax on soda and other sugar-laden drinks (did you know VitaminWater has nearly as many calories and grams of sugar as regular Coke?) to help pay for President Obama's new health care plan, according to the Wall Street Journal. The proposal will come from the Center for Science in the Public Interest, a Washington-based group that pressures and lobbies for healthier products.

Excise taxes are levied on products and manufacturers. They are usually passed on to the consumer.

The thinking, in part, is that, as with smoking, those who sell soda and those who consume soda ought to help pay for the cost of health care associated with the product.

Research in 2004 showed how soft drink consumption rose in the United States along with obesity (likely as other aspects of diet eroded, it should be noted). Energy intake from such drinks in the United States increased 135 percent between about 1977 and 2001. Over the same span, energy intake from milk dropped 38 percent. The findings were detailed in the American Journal of Preventive Health.

There are other ill effects linked to soda consumption:

Cut it out or cut it off

It is the link to diabetes — and the threat of amputation or kidney failure — that should most frighten the average person.

More than 20 million Americans, or 7 percent of the U.S. population, have diabetes. About 40 percent of U.S. adults ages 40 to 74 are pre-diabetic. About 80 percent of diabetics are overweight or obese.

According to our Bad Medicine Columnist Christopher Wanjek: "Diabetes is the leading cause of adult blindness and a major cause of amputation, nerve damage and kidney disease that requires dialysis. The total estimated cost of diabetes in 2007 was $174 billion, according to the American Diabetes Association. That's about as much as the cost of all cancers combined."

You a parent? Forget the tax. Consider your kids and what they consume.

Among children, cases of type 2 diabetes are rising, according to the CDC. It is a disease usually diagnosed in adults aged 40 years or older.

"The epidemics of obesity and the low level of physical activity among young people, as well as exposure to diabetes in utero, may be major contributors to the increase in type 2 diabetes during childhood and adolescence," according to the U.S. Centers for Disease Control and Prevention (CDC).

Is the NYC large soda ban a good idea?