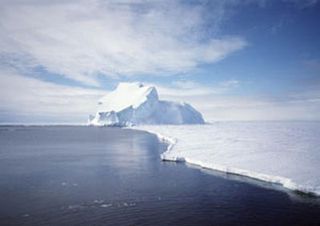 A NASA researcher captured this 2005 photo of the Antarctic ice sheet in West Antarctica.
(Image: © NASA)

Beneath fast-moving sections of the West Antarctic Ice Sheet [image], the continent's own natural plumbing system fills and empties a network of previously unknown subsurface lakes with surprising speed, a new study suggests.

The movement of water through the lakes might influence the flow of ice streams, which are meandering sections of the ice sheet that move faster than the surrounding ice. Further research into the phenomenon could help scientists understand how the frozen continent contributes to sea level rise.

While scientists previously have identified at least 145 subglacial lakes under the Antarctic ice sheet, this new system is notable because it occurs under fast-moving glaciers, the Whillans and Mercer Ice Streams, which carry ice from the interior to the Ross Ice Shelf on the west coast, and ultimately out to the ocean.

"We've found that there are substantial subglacial lakes under ice that's moving a couple of meters [yards] per day," said Robert Bindschadler of NASA Goddard Space Flight Center, one of the study's coauthors. "It's really ripping along."

These subglacial lakes are basins that lie between the ice and the underlying bedrock. In this region, the amount of water under the ice and its rapid movement were unexpected.

"We didn't realize that the water under these ice streams was moving in such large quantities and on such short time scales," lead author Helen Fricker said. "We thought these changes took place over years and decades, but we are seeing large changes over months."

About 2 cubic kilometers of water (that's about 5 gallons for each person in the United States every day for a year) drained in just three years from a previously unknown subglacial lake identified in the study, published today in the online version of the journal Science.

Satellite lasers were used to detect height differences in the surface ice [image] that revealed the apparent movement of the underground water system. The water is heavily pressurized by the overlying ice, which can be up to 1 kilometer (a little over half a mile) thick, so when the water moves, it raises and lowers the ice above [video]. When water is pooling in a lake, it pushes up on the ice above, but when the lake empties, the ice above depresses.

The elevation changes measured in the study were as much as 9 meters, or about the height of a 3-story building, according to Fricker.

"What we're seeing is changes on the surface which are reflecting what's happening at the bed due to the water under pressure at the bed moving from one part of the drainage system to another," Fricker said in a press conference.

It's unknown how exactly the water drains from the lakes. The researchers suspect it could drain from one or several channels in the ice or through subglacial till, or coarse sediment.

The discovery of the rapidly changing underground lakes is important because water beneath the ice bed could act as a lubricant and change the flow of the ice streams above.  Whether that is the case under these ice streams is uncertain--there is evidence that the ice stream is actually slowing down despite an increase in the amount of water under the ice.

And understanding how the underlying water affects the movements of these streams is critical to predicting how the ice will respond to global warming and contribute to sea level rise as it steadily lurches toward the ocean.

"It's the fast-moving ice," Bindschadler said, "that determines how the ice sheet responds to climate change on a short timescale."