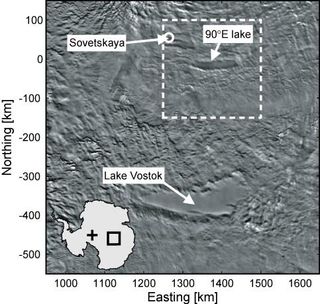 Antarctica has at least 145 small lakes buried under its ice and one large one called Vostok. Now scientists have found the second and third largest known bodies of subsurface liquid water there.

Exotic ecosystems frozen in time may thrive in the lakes, untouched for 35 million years, scientists said.

Vostok has a surface area of 5,400 square miles. One of the newfound lakes measures 770 square miles in size, or roughly the size of Rhode Island. The other is about 620 square miles.

Both sit under more than 2 miles of ice and are about a half-mile deep based on observed differences in gravity.

"Over the lakes, the pull of gravity is much weaker, so we know there must be a big hole down there," said Robin Bell, a geophysicist at the Lamont-Doherty Earth Observatory.

The larger of the two is named 90ºE for its location. The other is called Sovetskaya Lake.

The discoveries will be detailed in the February issue of the journal Geophysical Review Letters.

The shorelines of the lakes appeared in satellite images as perturbations in the surface. Also, the ice basically floats on the lakes and has slight depressions visible in radar images.

The combination of heat from below and a thick layer of insulating ice above keeps the water temperature at the top of both lakes at a balmy 28.4 degrees Fahrenheit, the researchers say, despite outdoor temperatures that can drop to –112 in winter.

The lakes are bounded by faults, Bell said, and the evidence suggests there is circulation and that they receive flows of nutrients that could support unique ecosystems.