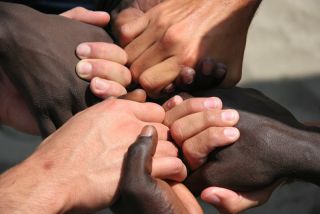 Skin cancer could have directly driven the evolution of dark skin in humans, a study on people with albinism in modern Africa suggests.

Albinism is an inherited disorder that prevents people from making melanin, a black or brown pigment. Albino people in sub-Saharan Africa almost universally die of skin cancer — and at young ages, according to a new paper published today (Feb. 25) in the journal Proceedings of the Royal Society B.

These modern tragedies point to a potential reason early humans evolved dark skin, said Mel Greaves, a cell biologist at the Institute of Cancer Research in the United Kingdom. [Can People Have Blue Skin?]

"Cancer has been dismissed by effectively all scientists in the past" as the reason for the evolution of black skin, Greaves told Live Science. "They did so believing that skin cancer cannot be a selective force acting on survival and reproductive success, because in present-day white-skinned people, it is usually benign or impacts too late in life."

There's no doubt that dark skin protects people from the sun. Individuals with white skin are far more susceptible to skin cancer than are people with dark skin. Exact skin tone makes a difference, but in general, African America skin has a sun protection factor of 13.4, compared with 3.4 in white skin, according to the Skin Cancer Foundation. [Fiery Folklore: 5 Dazzling Sun Myths]

When the first hominins (human ancestors) began hunting and gathering on the open savannah, they lost their body hair, likely to keep cool amid the strenuous exercise of their lifestyle. These early humans probably had pale skin, much like humans' closest living relative, the chimpanzee, which is white under its fur. Around 1.2 million to 1.8 million years ago, early Homo sapiens evolved dark skin. But evolutionary biologists haven't been convinced that skin cancer itself drove the evolutionary change. (Light skin evolved again after humans moved out of Africa to higher latitudes.)

So researchers have come up with alternative reasons that dark skin might promote survival. Possibilities include avoiding painful sunburns, which would prevent effective hunting and gathering; improving vision, because a lack of pigment comes with vision problems; protecting the sweat glands from sun damage; and protecting the body's supply of folic acid, which is crucial for neural development and which can be damaged by excessive ultraviolet (UV) radiation from the sun.

In addition, melanin may even protect against fungal infections in humid climates, according to a 2007 article in the journal Dermatologic Clinics.

While pigmentation offers clear benefits, Greaves believes that cancer alone could have done the trick in driving early humans' dark skin. In modern sub-Saharan Africa, albinism is common, with about one case per every 5,000 people. In comparison, there is only one case per every 20,000 people in Europe and the United States.

Greaves reviewed published cases on albinism in Africa and found that almost all albino individuals developed skin cancer in their 20s. In the South African state of Soweto, the risk of developing skin cancer is 1,000 times greater for people with albinism than for people with dark pigmentation.

Similarly, outside of Africa, the Kuna people of Panama have an albinism rate of one in 150 people. Again, virtually all albino Kuna individuals have skin cancer by age 30.

These early cancers would have been a fact of life for pale humans living in sub-Saharan Africa without the benefit of medical knowledge or sunscreen, Greaves concluded. These cancers would have turned fatal, as they do today, after metastasizing to other areas or after ulcerating and becoming infected. As a result, paler people would have died more frequently at younger ages, leaving mostly darker-skinned individuals to pass on their genes.

The idea is speculative, Greaves said. But, he added, his analysis of albinism in Africa is "the first time that a plausible case has been made that cancer has influenced human evolution."