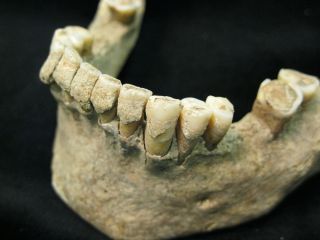 Fossilised dental plaque (calculus) on the teeth of a middle-aged man from the Medieval site of Dalheim, Germany, ca. AD 1100.
(Image: © Christina Warinner)

A "microbial Pompeii" has been found on the teeth of 1,000-year-old human skeletons. Just as volcanic ash entombed the citizens of the ancient Roman city, dental plaque preserved bacteria and food particles on the skeletons' teeth.

Researchers analyzed dental plaque from skeletons in a medieval cemetery in Germany, and found that the mouths of these aged humans were home to many of the same bacterial invaders that cause gum disease in the mouths of modern humans.

"One thing that is clear about the population we studied is that they didn't brush their teeth very often, if at all," said study leader Christina Warinner, an anthropologist at the University of Zurich in Switzerland and the University of Oklahoma in Norman.

The discovery of these bacteria also revealed clues to the dental hygiene and diets of these centuries-old humans, according to the study detailed today (Feb. 24) in the journal Nature Genetics. [5 Surprising Ways to Banish Bad Breath]

Plaque is a dentist's worst enemy, but it turns out to be a great time capsule for preserving the bacteria (or "microbiome") and bits of food on the teeth of humans long after they die. The sticky bacteria on teeth trapped particles of food and other debris, and over time, the calcium phosphate in saliva — the same mineral found in bones and teeth — caused the plaque to calcify into tartar.

"We knew that calculus preserved microscopic particles of food and other debris but the level of preservation of biomolecules is remarkable — a microbiome entombed and preserved in a mineral matrix, a microbial Pompeii," another study researcher, Matthew Collins from the University of York, in England, said in a statement.

With their new study, Warinner and her colleagues are the first to sequence the DNA in ancient dental tartar, using a rapid method known as "shotgun sequencing." The team reconstructed the genome of a major bacterial pathogen and recovered some of the first evidence of food molecules from ancient dental plaque.

The DNA in food found in the plaque matched pigs, sheep, bread wheat and vegetables such as cabbage. The researchers also found starch granules that matched cereals and the pea/bean family.

"Amazingly, it's much the same thing you would find at a German restaurant today," Warinner said.

The skeletons had many years' or decades' worth of plaque built up on their teeth, and many of them showed signs of gum disease and tooth decay. While a few individuals had surprisingly healthy teeth, most of the older adults had lost most or all of their teeth due to wearing, decay or dental disease.

The microbe species found in the ancient plaque were remarkably similar to ones found in modern mouths, the researchers said. Gum disease is most often caused by the species Porphyromonas gingivalis, Tannerella forsythia,Treponema denticola and Filifactor alocis, and these microbes were all present on the teeth of the skeletons with dental disease.

Gum diseases are usually caused by infections or inflammation of the gums and surrounding bone. About 47 percent of adults ages 30 or older in the United States have some form of gum disease, according to the Centers for Disease Control and Prevention.

Non-human primates and other wild animals rarely get dental diseases, Warinner said, which raises the question, "What is it about humans that allows these pathogens to grow?"Scientists speculate that modern human diets and lifestyles may be to blame, but Warinner's team plans to analyze more ancient populations from other time periods to find out.