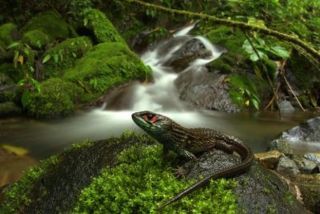 For reptiles and amphibians, southern Peru's Manu National Park is the most diverse protected area on the planet.

Scientists have counted a recording-breaking 287 species of of snakes, lizards, turtles, frogs and salamanders within the borders of the largely inaccessible and undeveloped reserve and its buffer zone.

The landscape of Manu National Park ranges from lowland Amazonian rainforests to high-altitude cloud forests along the eastern slope of the Andes. The area is accessible by dirt road from Cusco, Peru, and it has long been recognized as a biodiversity hot spot. [8 of the World's Most Endangered Places]

The park hosts more than 1,000 kinds of birds (or about 10 percent of the world's bird species) and more than 1,200 species of butterfly. The region is also home to at least four Amazonian tribes and a nomadic group of hunter-gatherers known as Mashco-Piro, many of whom have had little contact with the outside world.

A team of scientists recently surveyed the park and looked to previously published data to determine that there are 155 amphibian species and 132 reptile species in the reserve, making it the most diverse protected area anywhere for these creatures. The previous record holder was Yasuní National Park in Ecuador, where scientists counted 150 amphibian and 121 reptile species in a 2010 study.

Manu National Park's population of amphibians and reptiles includes some newly discovered creatures, such as new species of aquatic lizards in the Potamites genus and the Noble's Pygmy frog (Noblella pygmaea), which could fit on a fingertip and is one of the tiniest amphibians in the world.

Threats still loom in places as pristine as Manu National Park. Deforestation, gold mining and oil and gas drilling are closing in on the buffer zone around the park. Frogs inside the park are being hit by Batrachochytrium dendrobatidis, or chytrid fungus, which has wiped out frog populations around the world, researchers say.

"All of this is threatening the biodiversity in the park and the native peoples who live in settlements in the park," study researcher Rudolf von May, a post-doctoral researcher in UC Berkeley's Museum of Vertebrate Zoology, said in a statement.

The findings were detailed in the most recent issue of the journal Biota Neotropica.