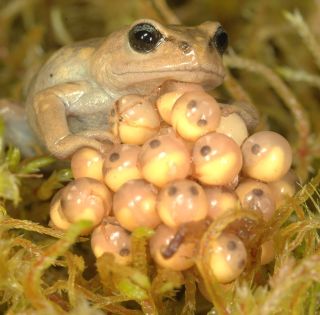 Researchers found frogs living at higher elevations in the Andes of southern Peru, such as this female with her eggs (Bryophryne cophites), can withstand rising temperatures.
(Image: © Alessandro Catenazzi)

Warming of the climate isn't directly causing the decline in frog populations in the Andes mountains. Instead, the frogs are falling victim to a killer fungus that is decimating amphibian species worldwide: Batrachochytrium dendrobatidis, or chytrid fungus.

A new study of frogs living in the Andes of southern Peru found that the animals can withstand rising temperatures at higher elevations. But the warming trend has extended the range where chytrid fungus can thrive, leading to widespread infections of the disease known as chytridiomycosis.

The findings contribute to scientists' understanding of the decline or extinction of hundreds of frog species around the world, and could help conservationists preserve the animals before they're wiped out, the study researchers said. [Image Gallery: Cute & Colorful Frogs]

"This pathogen is like no other in the history of the world. Chytrid fungus outbreaks make bubonic plague look like a slight cough," study researcher Vance Vredenburg, associate professor of biology at San Francisco State University, said in a statement. "We need to look carefully at what is causing these outbreaks."

Vredenburg and his colleagues ventured to the eastern slopes of the Andes near Manu National Park in southern Peru, a place so remote the human tribes who live there have no contact with the outside world.

Frogs that were seen in the high mountains 10 to 12 years ago have all but disappeared now, and scientists have debated whether climate change or fungal disease is more to blame.

To find out, the researchers captured frogs from a range of elevations and placed them in water baths. They gradually increased the temperature of the water from about 64 to 95 degrees Fahrenheit (18 to 35 degrees Celsius), and repeatedly flipped the frogs on their backs. If the frog could flip itself back over on its own, that was a sign it could take the heat. If it stayed supine for more than five seconds, that meant the frog couldn't live at that temperature.

Frogs from higher elevations were able to right themselves at a wide range of temperatures, implying that climate change wasn't the primary cause of their decline, according to the study detailed online today (Dec. 13) in the journal Conservation Biology.

Laboratory studies of the killer fungus show that it thrives best between 63 and 77 F (17 and 25 C) — the temperature at the same elevation as the highland frogs — suggesting the fungus is probably the reason for the frog disappearances.

However, climate change is still part of the equation. Chytrid fungus doesn't pose as much of a threat to lowland frog populations, but the frogs can't survive as well as their habitat warms. It's a catch-22:

"The frogs in the highlands will not suffer from climate change anytime soon, but they're doomed because of the fungus, whereas the frogs in the lowlands are shielded from the fungus, but they're going to be toasted, because it's too hot," study researcher Alessandro Catenazzi, a zoologist at Southern Illinois University, Carbondale, told LiveScience.

It's possible some frogs will be able handle the warming temperatures, and natural selection would favor them. But the fungus remains a major threat. "We don’t really know what exactly is causing the epidemics," said Catenazzi, who is currently investigating methods of protecting the frogs. One method involved inoculating them with fungus-resistant bacteria, and some scientists have already been doing this.

Human activities probably introduced chytrid fungus to the Andes, and conservation efforts should focus on understanding the disease it causes and stopping its spread, Catenazzi said.