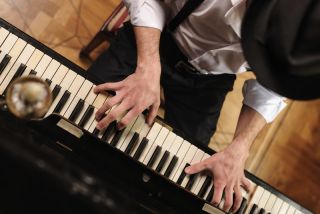 When jazz musicians let their creativity flow and start to improvise melodies, they use parts of their brains typically associated with spoken language — specifically, regions that help people interpret syntax or the structure of sentences, according to a new study.

Researchers at Johns Hopkins University's School of Medicine in Baltimore tracked brain activity as two jazz musicians played pieces from memory and then engaged in back-and-forth improvisation, creating something akin to a spontaneous musical conversation. They found that areas of the brain associated with syntax and language were very active as the musicians were improvising.

"The areas of the brain related to language ramped way up when the musical behavior was spontaneous between the two musicians," said Charles Limb, an associate professor in the department of otolaryngology-head and neck surgery at Johns Hopkins and senior author of a new study published today (Feb. 19) in the journal PLOS ONE. [10 Things You Didn't Know About the Brain]

While this seems to demonstrate that the brain uses the same syntactic areas to process musical notes and spoken words, Limb said the mechanisms are more complex than simply thinking of music as a universal language.

"During the improvised exchanges, the parts of the brain that interpret the meaning of language — semantics — were completely deactivated," Limb told Live Science. "I figured we would have the involvement of language areas during spontaneous musical conversation, but I did not really anticipate the semantic area would be deactivated the way it was."

This could suggest there is a fundamental difference between how the brain processes meaning for music and language.

The researchers chose to focus on jazz musicians because of their impressive ability to invent new melodies on the spot, particularly as part of an exercise known as "trading fours," when musicians participate in improvised call and response-style exchanges that typically last four bars.

"Jazz is maybe one of the best models to study spontaneous creativity," Limb said. "Jazz musicians have brains that are so remarkably capable of improvising that it's a rare opportunity to glimpse the inner workings of the brain in action."

Limb is a musician himself, and has long been interested in the relationship between music and language.

"I'm somebody who is a musician and has always loved music deeply, but decided not to be a musician. I became a hearing specialist and surgeon instead," Limb said. "But, the research in my lab is about understanding how we're able to accomplish musical things, how the brain is able to hear music, and other areas of high-level creativity."

Limb said securing funding for this type of research is tricky, but he hopes to study brain activity across various types of creative activities, including writing and painting. He is also interested in investigating whether there are differences between children and adults, or between amateurs and professionals.

Still, Limb considers himself fortunate to be able to incorporate his love of music into his life's work. "I'm maybe the luckiest surgeon in the world," he said.