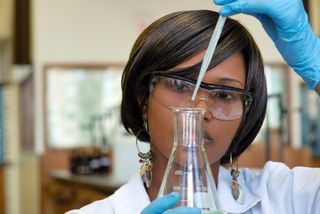 Though many Americans are lacking in their own knowledge of basic science, a majority have a high opinion of scientists and are eager to hear about new discoveries, according to a new report.

More than 90 percent of Americans say scientists are "helping to solve challenging problems" and are "dedicated people who work for the good of humanity," the report shows.

What's more, four out of five Americans say they are interested in "new scientific discoveries," with new medical discoveries topping the list.

"It's important for Americans to maintain a high regard for science and scientists," John Besley, an associate professor in MSU's department of advertising and public relations, said in a statement. "It can help ensure funding and help attract future scientists," Besley added. Even so, only a third of the survey's respondents actually think science and technology should get more funding.

Besley was at the annual meeting of the American Association for the Advancement of Science in Chicago today (Feb. 14) discussing the 2014 Science and Engineering Indicators report. The report, which the National Science Foundation releases every two years, details the state of science education, research and industry in the country and draws on several public opinion surveys to gauge Americans' perceptions of science.

On the front of scientific literacy, the report shows there's definitely some room for improvement. On average, Americans scored 6.5 correct answers out of the nine questions on basic physical and biological science, according to data from 2012 General Social Survey, conducted by the National Opinion Research Center, which was included in the report. [See how well you do answering the same 9 questions]

About 500 years after Nicolaus Copernicus proved that the Earth revolves around the sun, only 3 in 4 Americans (74 percent) know that to be true, according to that survey.

And despite amazing fossil discoveries of human ancestors who walked the Earth hundreds of thousands of years ago, less than half (48 percent) of Americans know that human beings, as we know them today, developed from earlier species of animals, the poll showed. (Perhaps that's not too surprising considering that a Pew poll released in December 2013 found that a third of Americans don't believe in evolution, but rather that humans and other life forms have existed in their current states since the beginning of time.)

Nonetheless, nearly 90 percent of the survey respondents said the benefits of science outweigh any potential dangers. And a majority (nearly 60 percent) of Americans have engaged in some informal scientific education by visiting a zoo, aquarium, natural history museum or a science and technology museum, the report says.