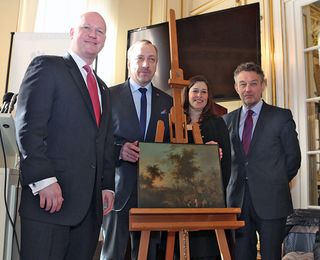 The painting by German artist Johann Conrad Seekatz was one of thousands of art objects pilfered during the German occupation of Poland, between 1939 and 1945.

The Seekatz painting, "Saint Philip Baptizing a Servant of Queen Kandaki," had crisscrossed the globe for decades before it turned up at auction in New York in 2006, misattributed to Dutch painter J.C. Saft, investigators said.

Doyle New York Auctioneers and Appraisers sold the artwork for about $24,000 to the Rafael Valls Gallery in London. After being alerted by Polish cultural authorities, U.S. officials launched an investigation into the painting and identified it as the missing Seekatz.

The artwork, which was seized in 2012, was repatriated in a ceremony in New York on Thursday (Feb. 6), a day ahead of the release of the movie "The Monuments Men," which stars George Clooney and Matt Damon and recounts the true story of art historians who were enlisted to rescue artworks looted by the Nazis.

"I am very happy that another painting that was registered as a Polish wartime loss comes back to Poland today," Poland's Minister of Culture and National Heritage Bogdan Zdrojewski said in a statement. "Unfortunately, due to our tragic history, the database of Polish wartime losses is still enormous. However, the Polish government attaches a great importance to this issue as it's one of our key priorities."

Poland maintains an online database of artworks that remain missing seven decades after World War II. Some cultural objects stolen from Poland have been found and returned by U.S. Immigration and Customs Enforcement's (ICE) Homeland Security Investigations (HSI) unit, including a Polish army pre-1939 banner and two Julian Falat paintings, "The Hunt" and "Off to the Hunt."