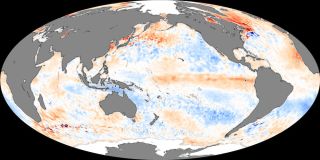 The warmer-than-average sea surface temperatures across the eastern Pacific Ocean that are the hallmark of an El Niño are clearly seen in this map of ocean temperatures taken by satellite in 2006. Redder spots are where tempeartures are warmer than normal and bluer ones are where temperatues are colder.
(Image: © NASA)

A team of scientists now claims it can forecast disruptive El Niño events a year in advance, and that an El Niño has a 3-in-4 chance of happening later this year.

However, other scientists criticize this work, calling the methods used for the forecast outdated and the data underlying it limited.

El Niño is a phenomenon that occurs when equatorial Pacific waters are abnormally warm. An El Niño event can disrupt ocean and wind currents across the globe, wreaking havoc on the climate and triggering disasters worldwide.

El Niño, which means "little boy" or "the baby Jesus" in Spanish, was named by South American fishermen, who noticed that the ocean would heat up around Christmastime. Its counterpart, La Niña (Spanish for "little girl") occurs when equatorial Pacific waters are unusually cold, and it can also influence weather events around the world. Together, El Niño and La Niña are known as the El Niño Southern Oscillation, or ENSO.

It's now routine for scientists to forecast, about six months in advance, how this cycle will behave. Predictions of its long-term behavior, however, have been hampered by the relatively short history scientists have of monitoring it.

However, researchers in Germany and Israel recently claimed they could forecast El Niño about a year ahead. Now, they suggest El Niño has a 3-in-4 chance of returning in late 2014. The forecast "may allow society to better adapt and mitigate the sometimes devastating effects of an El Niño event," study co-author Armin Bunde, a theoretical physicist at the University of Giessen in Germany, told Live Science.

Conventionally, scientists forecast ENSO by checking water temperatures in the eastern Pacific, along the equator. This water temperature is strongly influenced by the trade winds blowing across the equator, which may or may not change their direction in the springtime. This uncertainty limits predictions to six months or less, since ENSO forecasts depend in part on the direction the trade winds blow.

The researchers said their method correctly predicted the absence of El Niño events in 2012 and 2013, and forecast about a 75 percent chance of an El Niño in late 2014. In the future, they hope they can also forecast the strength of El Niño events. They detailed their latest findings online Feb. 10 in the journal Proceedings of the National Academy of Sciences.

However, climatologist Tim Barnett at the Scripps Institution of Oceanography in La Jolla, Calif., who did not take part in this research, said the methods the researchers employed were outdated.

"The techniques the researchers used made me feel like I was back in the 1980s and 1990s," Barnett said.

Climatologist Anthony Barnston, chief forecaster at Columbia University's International Research Institute for Climate and Society in the Palisades, N.Y., who did not participate in this study, noted that this latest research did not model the physics of the seas or atmosphere, but only looked for statistical patterns in temperature readings.

"A common problem with statistical methods is that you can always find a statistical relationship if you look hard enough," Barnston said. "Also, while they looked at data from 1950 to 2013, there is relatively lower quality temperature data from that area in the '50s and '60s. We wish it were better, but it isn't, and when you're using a statistical method and define the (statistical) relationships from not-so-great data, you lose a considerable degree of success."

"The simplistic calculations they use basically ignore all the physics we've discovered about the ocean and the atmosphere of the equatorial Pacific," Barnett added.