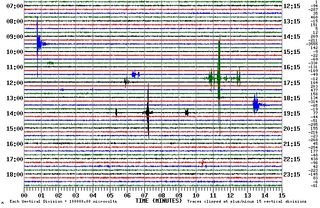 At around Noon on Thursday (Feb. 6), firefighter Michael Maykrantz was on duty in Ocean City, Md., when the doors of the firehouse started rattling and the floor vibrated and shook.

"We've had sonic booms in town before, but this seemed different," Maykrantz told the Baltimore Sun. "It was more sustained, and then there was a pause for about a minute — and then it started again."

Was it an earthquake, a sonic boom or some other mysterious phenomenon? Despite a number of official investigations, some frazzled Maryland residents still aren't sure what happened. [Weirdo Weather: 7 Rare Weather Events]

The Eastern Seaboard of the United States isn't generally considered a seismically active region, but earthquakes have occurred in the area. In 2011, a 5.8-magnitude temblor with an epicenter in Virginia shook the surrounding area, including Maryland and Washington, D.C.

And although major earthquakes are generally associated with the West Coast and the Pacific Ring of Fire, there have been powerful tremors in other parts of the United States. An 1886 quake near Charleston, S.C., had an estimated magnitude of 7, and the infamous series of New Madrid temblors of 1811-1812 — with estimated magnitudes of 7.5 to 7.7 — were felt over much of eastern North America, including portions of Maryland.

But the booming and rattling that occurred in and around Ocean City didn't have the seismic pattern typical of an earthquake, according to the Maryland Geological Survey (MGS). "When the Earth moves, you get certain kinds of waves," MGS Director Richard Ortt told the Sun.

In an earthquake, seismographs would record a buildup lasting a few seconds, followed by powerful shaking, then secondary and tertiary waves. But that "signature" wasn't recorded by MGS seismographs.

Was it a frost quake?

A little-known natural phenomenon occurs when the temperature takes a sudden plunge: a frost quake, sometimes referred to as a "cryoseism." A quick freeze can cause ice in the ground to expand rapidly and crack, producing thunderous booms. Several frost quakes were reported throughout the Great Lakes region last month as the polar vortex swept across Canada and the northeastern United States.

Though frost quakes can shake the ground audibly, and their tremors can reach as high as magnitude 1.5, their effects are so localized that the tremors are rarely caught on seismographs.

That's why experts have ruled out frost quakes as a cause of Maryland's shaking, leaving a man-made cause as the leading culprit.

After officials determined that no blasting or construction activity was responsible for the rattling, they turned to the next suspect: a sonic boom. Officers at Dover Air Force base north of Ocean City, and NASA Wallops Flight Facility on the Delmarva Peninsula, however, claimed they had no unusual flight activity to report.

Finally, the U.S. Navy reported that it had scheduled two supersonic flights off the Atlantic coast on Thursday, originating from its test-flight facility at Patuxent Naval Air Station in southern Maryland.

While that explanation satisfied local officials — and some rattled Maryland residents — to some observers, the noise and vibration seemed different than in previous sonic booms. Ortt suggested that atmospheric conditions might have been responsible for the difference.

"With the cold weather and high barometric pressure, any wave in the atmosphere would reach the ground relatively well," Ortt told the Los Angeles Times.