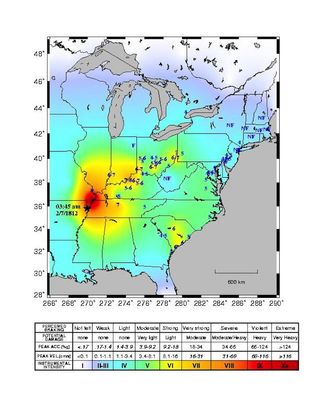 After wreaking havoc 200 years ago with huge earthquakes that made the Mississippi River flow backwards, the New Madrid Seismic Zone has continued to rattle the Midwest with about 200 quakes every year.

Whether these tiny quakes mean the fault is old and dying or locking and loading for another massive earthquake has sparked a long and lively debate among scientists.

A new study suggests recent reports of the "death" of the New Madrid Seismic Zone were premature.  Based on statistical computer models, which predict how many aftershocks from the 19th century quakes should hit the region, U.S. Geological Survey (USGS) scientists think the past two centuries of earthquakes suggest the New Madrid Seismic Zone is popping more often than expected. Instead of slowing down, earthquake activity on the Reelfoot Fault continues at a sprightly pace. [Video: How Earthquakes Lead To Aftershocks]

The findings were published today (Jan. 23) in the journal Science.

"I don't agree that this area is dying out," said Morgan Page, lead study author and a geophysicist with the USGS in Pasadena, Calif. "It's not going to go off anytime soon, but we do have evidence that more stress is being built up now. Eventually, that energy will have to be released in a large earthquake."

At rest, or active?

The New Madrid Seismic Zone is a series of ancient faults cutting the Midwest and now hidden beneath the Mississippi River's thick mud. In late 1811 and early 1812, the New Madrid earthquakes struck on the Reelfoot Fault — four big earthquakes and many, many aftershocks emanating from the borders between Missouri, Tennessee and Arkansas. With each temblor estimated at between magnitude 7 and magnitude 8, the seismic energy shook all of eastern North America and destroyed the town of New Madrid, Mo.

After the 1811-1812 earthquakes, the Reelfoot Fault could have faded from memory. Faults in the middle of continents, like the New Madrid Seismic Zone, may trigger earthquakes only rarely — every 10,000 years or more. (But this is not always the case; some "intraplate" faults, as these continent-cutting faults are called, can be speedy jackhammers.)

In recent years, a handful of studies claimed the New Madrid was settling down instead of prepping for another round of earthquakes. But the USGS team instead suggests that ongoing earthquakes in the New Madrid Seismic Zone are something new, resulting from the buildup of seismic energy on the faults.

"Even though we can't predict earthquakes, we can predict the rates of aftershocks over time," Page explained. The frequency of aftershocks — smaller quakes that follow the big earthquake — decreases with time, known in seismology as Omori's Law. And in the New Madrid Seismic Zone, the aftershocks aren't following Omori's Law.

Page and Hough said that if the previous 200 years of earthquakes were aftershocks, then their modeling predicts that there should have been more than 130 magnitude-6 earthquakes as well — each bigger than the widely felt 2011 Virginia earthquake. But there's nothing of the sort in the historical record of earthquakes.

"These earthquakes are happening independently [of 1811-1812]," Page told LiveScience's OurAmazingPlanet. "200 years is too long for an aftershock sequence. Instead, we think stress is being built up now."

But researchers who say the New Madrid Seismic Zone is dying use the same aftershocks to support their argument. "The New Madrid aftershocks are different from what we see on [California's] San Andreas Fault and in Japan," said Seth Stein, a seismologist at Northwestern University in Illinois who was not involved in the study. "I don't think the model shows that they're not aftershocks; I think it shows that aftershocks here behave differently. We would expect faults within plates to have long aftershock sequences."

Page agrees that faults in the middle of tectonic plates can pump out aftershocks for longer than at plate boundaries, where two plates meet. (The seismic zones may behave differently because they are structurally different, such as weaker or stronger.) But she said the modeling accounts for this effect. "Even though aftershocks in intraplate regions do go on longer, they still follow Omori's Law," Page said.

However, scientists who are familiar with the statistical-modeling approach Page and Hough used questioned whether the method holds up when applied in the middle of tectonic plates, as opposed to their edges.

"I think one thing is clear in that they have shown the central U.S. behaves differently than California in terms of seismicity and the expected behavior of aftershocks," said Charles Langston, director of the Center for Earthquake Research and Information at the University of Memphis in Tennessee. "Current New Madrid seismicity has other characteristics that make it unusual and very different from California seismicity."

The New Madrid Seismic Zone does have a history of past earthquakes, in 1450 and 900. And the most recent GPS study found movement across the faults of about 4 millimeters (0.16 inches) a year — not too shabby for the middle of plate.

Combined with geologic evidence, "it is not clear what it all means, nor is it clear how strain accumulation and seismicity are linked here," Langston told LiveScience's OurAmazingPlanet. "We haven't found the "smoking gun" yet to explain these earthquakes," he said.