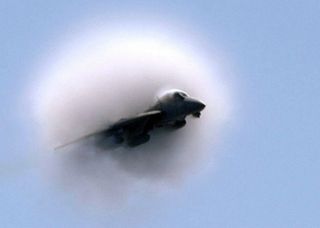 A sonic boom is a visual phenomenon caused by water droplets getting trapped between two high-pressure surfaces of air.
(Image: © U.S. Navy.)

There's something strange about the notion of seeing the sound barrier, as this Navy photograph suggests is the case. The sound barrier is just a certain velocity relative to the surrounding environment, not an actual membrane to be penetrated by a jet's nose.

So what's going on?

The visual phenomenon in this picture is caused by a layer of water droplets trapped between two high-pressure surfaces of air. In humid conditions, condensation can gather in the trough between two crests of the sound waves produced by the jet. This effect does not necessarily coincide with the breaking the sound barrier, although it can.

The origins of the Mach number stretch back before humans ever took flight, to 1887, when Austrian physicist Ernst Mach established his principles of supersonics. His famous Mach number is the ratio of an object’s velocity to the velocity of sound, relative to the local environment. Sounds are waves of disturbance in the atmosphere and so their velocities depend on air temperature and pressure.

But on breaking the sound barrier the pressure field of the aircraft extends from the rear of the plane in a Mach cone — a shock wave that builds and causes a sonic boom.