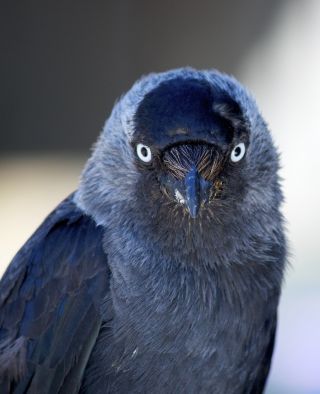 Jackdaws may be the first animal besides primates found to use their eyes to communicate.
(Image: © Copyright Richard Woods)

Primates aren't the only animals that communicate with their eyes — some birds do it too, a new study finds.

Much is known about how humans use their eyes to convey sentiments, but very little is known about how birds use this mode of communication. New research suggests jackdaws — a bird in the crow family found in Europe, western Asia and North Africa — use their peepers to deter competitors from approaching their nests.

This is the first time scientists have shown that animals besides primates use their eyes to communicate.

Jackdaws are perching birds, or passerines. About 10 percent of passerines have colored irises, the circular structures in the eyes that control how much light gets in.

Unlike their dark-eyed relatives, rooks and crows, "jackdaw eyes are almost white, and their striking pale irises are very conspicuous against their dark feathers," Gabrielle Davidson, lead author of the study, detailed Tuesday (Feb. 4) in the journal Biology Letters, said in a statement.

But do jackdaws use their bright eyes for communication? asked Davidson, an animal behavior researcher at the University of Cambridge in the United Kingdom.

In the study, Davidson installed one of four different pictures in natural jackdaw nest boxes near Cambridge, England, before the spring breeding season. One was solid black, one had just a pair of jackdaw eyes, one had a jackdaw's face with jackdaw eyes and one had a jackdaw's face with black rook eyes. Then, she filmed the birds to see how they behaved in response to each image.

The videos revealed the nest box containing the jackdaw with bright eyes was the most likely of all the images to deter other birds from approaching the nest. The findings suggest that jackdaws use their eyes to send a warning message to other birds.

Jackdaws nest in hollow tree cavities, which are in limited supply. The birds also nest close together and fight over the best real estate. The trouble often starts when jackdaws approach nests belonging to other birds.

The observation that jackdaws use their eyes to communicate raisesthe question of "whether this is unique to jackdaws, or if other cavity nesting birds also use their eyes in a similar way," Davidson said.