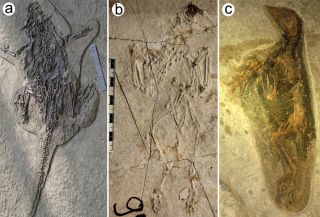 A mass grave in a Chinese lakebed contains the extremely well-preserved fossils of dinosaurs, mammals and early birds, but the cause of the animals' death has long puzzled scientists.

Now, an analysis of the fossils and the sediments that entombed them suggests that an explosive eruption — like the one that destroyed the Roman city of Pompeii — scorched and buried the animals.

"What we're talking about in this case is literal charring, like somebody got put in the grill," said George Harlow, a mineralogist at the American Museum of Natural History in New York, one of the researchers of the study detailed today (Feb. 4) in the journal Nature Communications. In other words, Harlow told Live Science, "They got fried." [See Images of the 'Animal Pompeii' in China]

An ancient ecosystem known as the Jehol Biota existed in northern China about 120 million to 130 million years ago, consisting of dinosaurs, mammals, early birds, fish, lizards and other creatures. The animals lived among coniferous forests and lakes, in the shadow of volcanoes. Fossils of these animals are found in the Yixian and Jiufotang rock formations, embedded in layers of volcanic material.

The eruption of Mount Vesuvius in A.D. 79 buried Pompeii, Herculaneum and other cities, entombing people and animals in suspended death poses. Something similar seems to have happened to the Chinese fossils, the researchers found.

In the study, led by Harlow's colleague, Baoyu Jiang of Nanjing University, the researchers examined fossils on loan from the Sihetun Fossil Museum and the Institute of Vertebrate Paleontology and Paleoanthropology at the Chinese Academy of Sciences. These included a motley assortment of birds, birdlike dinosaurs and mammals.

The team studied not only the fossils themselves, but also the chemistry and mineralogy of the volcanic rock and sediment that formed the animals' ashen tomb.

Burned to a crisp

The skeletons were embedded in fast-moving flows of hot ash and gas, known as pyroclastic flows, the researchers found. Just like the people of Pompeii, the animals were cemented in their death poses by this ash. Moreover, the animals' bones were spattered with black streaks, suggesting charring occurred.

The mass mortality event preserved in the Jehol biota provides an opportunity to study the Early Cretaceous terrestrial ecosystem, just as the history and culture of Pompeii can be gleaned from its human victims, Jiang told Live Science in an email.

Eruptions like this one — which produce clouds of ash that become denser than the air and rain down, blasting waves of ash and hot gas outward — are common throughout history, the researchers said. Krakatoa and Mount St. Helens are well-known examples.

Previous research suggested the fossils of the Jehol Biota were preserved in frequent volcanic eruptions, but no one had studied the process in-depth.

Another possibility is that the animal bodies floated into the lake or were washed there by flooding. The researchers ruled these scenarios out, because the structure of the sediments and the intactness of the animal skeletons didn't fit with these explanations.