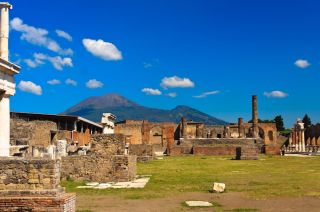 Ruins of Pompeii with Mount Vesuvius in the background.
(Image: © Klagyi | Shutterstock)

The commoners of the ancient city of Pompeii may have eaten a varied diet, with the wealthier even dining on giraffe, new research suggests.

Remains of food scraps found in the drains of Pompeii, Italy, a Roman city wiped out by a volcano, revealed that the middle- and lower-class residents dined on cheap but healthy foods, while slightly wealthier citizens dined on delicacies.

The new findings belie the common belief that the Roman elite dined on exotic delicacies while poor Romans starved on birdseed.

"The traditional vision of some mass of hapless lemmings — scrounging for whatever they can pinch from the side of a street, or huddled around a bowl of gruel — needs to be replaced by a higher fare and standard of living, at least for the urbanites in Pompeii," study co-author Steven Ellis, a classics professor at the University of Cincinnati, said in a statement.

Pompeii was a bustling Roman city that was buried in ash after the volcanic eruption of Mount Vesuvius in A.D. 79. Ellis and his colleagues excavated about 20 shop fronts near one of the once-bustling gates of Pompeii known as the Portia Stabia. The latrines and cesspits behind the food sellers revealed charred food waste from the kitchens, as well as human waste, that dated as far back as the fourth century B.C., when Pompeii was still in an early stage of development. [Preserved Pompeii: Photos Reveal City in Ash]

Along with grains, the waste revealed that the commoners of Pompeii ate a simple, but fairly varied, Mediterranean diet that included lentils, olives, nuts and fish, as well as the odd scrap of salted meat.

More upscale restaurants could be distinguished by the wider array of delicacies they served.

"The material from the drains revealed a range and quantity of materials to suggest a rather clear socioeconomic distinction between the activities and consumption habits of each property, which were otherwise indistinguishable hospitality businesses," Ellis said.

For instance, the drains at a more central property contained traces of imported foods such as shellfish, sea urchin and even a giraffe's leg.

"This is thought to be the only giraffe bone ever recorded from an archaeological excavation in Roman Italy," Ellis said. "How part of the animal, butchered, came to be a kitchen scrap in a seemingly standard Pompeian restaurant not only speaks to long-distance trade in exotic and wild animals, but also something of the richness, variety and range of a nonelite diet."

The team also found traces of exotic and imported spices that came from far-flung regions such as Indonesia.