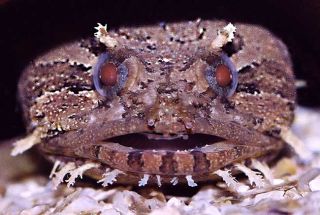 Toadfish can eavesdrop on the calls of dolphins to avoid getting eaten.
(Image: © Midge Marchaterre)

Fish can eavesdrop on the calls of dolphins to avoid getting eaten, a new study suggests.

"Probably a lot of fish can do this," said lead researcher Luke Remage-Healey, a behavioral neuro-endocrinologist at University of California, Los Angeles.

A bottom-dwelling fish found off the coast of Florida called the gulf toadfish [image] is prime prey for dolphins, which often listen to toadfish calls to find their targets. In fact, 80 percent of bottlenose dolphin diets containing sound-producing fish. But whether the toadfish peels its “ears” toward dolphins has remained a mystery.

Remage-Healey first suspected that gulf toadfish could listen in on hungry dolphins' calls two years ago while recording the mating calls of the male toadfish off the Gulf coast of Florida.

"Then, they all stopped calling," Remage-Healey recalled. "My field assistant noticed dolphins [image] foraging right over the toadfish site, and we heard we were recording dolphin sounds instead."

The researchers captured toadfish and placed each in its own cage and rested the cages on the seabed in the breeding patch. From underwater speakers, they played recordings of snapping shrimp sounds or dolphin sounds — both high frequency "whistles" that dolphins use to communicate with each other, and low frequency "pops" likely used to locate a quarry. The shrimp sounds mimicked a common background noise in the bay.

Results showed that the toadfish ignored the  snapping shrimp sounds and dolphin whistles and continued on with their mating calls. But when the fish heard dolphin pops or combinations of pops and whistles, they drastically reduced their calling rates.

As confirmation, measurements of toadfish blood taken immediately after the dolphin sounds were played revealed that levels of the stress hormone cortisol shot up after they heard pops.

Remage-Healey, Douglas Nowacek of Florida State University and Andrew Bass of Cornell University in New York report their findings in the Nov. 15 issue of the Journal of Experimental Biology.