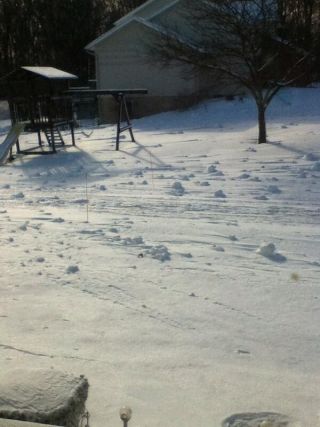 Known as snow rollers, the delicate formations are as light as meringues and may crumble when touched, but others are icy enough for play. They were a social media phenomenon today (Jan. 27), sweeping Twitter and Facebook as people from Ohio, Illinois and Pennsylvania posted images of their yards dotted with strange snowballs.

According to the National Weather Service, snow rollers need just the right combination of light, sticky snow, strong (but not too strong) winds and cold temperatures to form. It's been about 10 years since snow rollers were reported in western Pennsylvania, but snow rollers appeared in near Spokane, Wash., in 2009.

Like a snowball spinning downhill in a cartoon, picking up size, snow rollers grow layer by layer as they're rolled along by the wind. Sometimes they do roll downhill, but in this case, wind created the mysterious, hollow snow tubes. Pictures posted online show tracks in the snow left behind as the snow rollers swept across snowy yards and golf courses.

The snow rollers are the latest in a string of strange winter weather events this month. After the polar vortex dropped temperatures in early January, Lake Michigan birthed its annual crop of giant ice balls. The ice balls form as freezing lake water is tumbled by waves, forming spheres. The coastline of Lake Superior froze as well, allowing hikers to head out to icy sea caves near Wisconsin's Apostle Islands. And the New Year started with a bang in Canada when frost quakes were reported throughout Ontario. When the polar vortex swept through, the cold air rapidly froze water in the ground, causing ice to expand and crack in frost quakes.