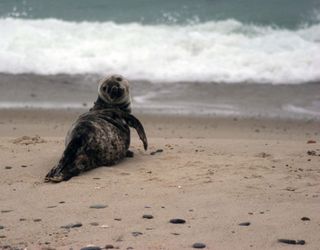 On a 65-acre island off the coast of northern Maine, hundreds of gray seals gather each year to give birth to and rear pups, and mate with other seals.

Thanks to explore.org, viewers around the world can watch the nursery scene unfold on a live, high-definition webcam every day from 10 a.m. to 2 p.m. EST.

The camera has already captured the birth of one gray seal baby, an event rarely seen by researchers, let alone the general public. You might also spot some bald eagles, which frequent the island, and have been known to feast on seals' placentas and embryonic sacs.

Seal pupping often takes place on remote islands that are difficult for humans to access. The cameras are a "great educational tool for people who would never normally have the opportunity to go to a pupping site," said Stephanie Wood, a biologist who studies gray seals at the National Oceanic and Atmospheric Administration (NOAA) and the National Marine Fisheries Service in Woods Hole, Mass. [Gallery: Seals of the World]

Scientists first documented the pupping on Seal Island in 2000. Since then, the Seal Island National Wildlife Refuge has become the second largest pupping site in the United States, after Muskeget Island to the west of Nantucket. Gray seals are not endangered, but they are protected under the U.S. Marine Mammal Protection Act.

Seals arrive at the island from mid-December through early January to bear their young. The females go on a fast during that time, converting their blubber into milk for their pups. When seal pups are born, they weigh between 24 and 44 lbs. (11 to 20 kilograms), and can put on more than 4 lbs. (2 kg) per day until they are weaned.

Two to three weeks after giving birth, mother gray seals wean their pups. After the moms leave, the pups stay ashore a week or two longer, molting their white baby fur (called "lanugo") before venturing out to sea on their own.

The new moms then mate with eligible bachelors that have come to the island at the same time. These mating sessions produce the pups that will be born the next season.

Adult male seals come and wait on the island, where they can be territorial. The female seals become receptive to mating as soon as they wean their pups, so "they're on a bit of a tight schedule," Wood told LiveScience.

After the females have mated, and an egg has been fertilized, it will divide a few times and then enter a state of suspended animation known as delayed implantation. A few months later, once the female has had a chance to start eating again, the egg implants in her uterus and starts developing into a new pup.

Healthy females may start having pups at the age of four, and live into their 30s or 40s, giving birth to one pup per year. Pups have a survival rate of about 40 to 60 percent in their first year, but it increases dramatically in subsequent years, Wood said.

Explore.org originally set up the camera to observe the puffins that inhabit Seal Island during the summer. The project's leaders started airing footage of the gray seals in December 2013. In addition to the live birth, the seal cam also glimpsed a seal branded with a serial number that had previously been born on Canada's Sable Island. This find allowed researchers to track the animal's movement.

A team of volunteers controls the cameras for five hours a day. The cameras also allow viewers at home to take snapshots of the seals for their own enjoyment, or to help researchers gather data on the behavior of the seals and eagles.