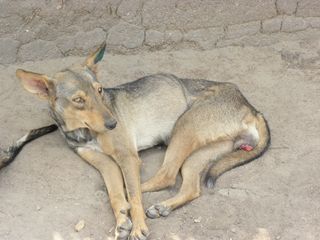 Nearly all cancers remain within an individual animal or human. But one cancer outlived the dog in which it emerged by spreading its abnormal cells on to other dogs during mating. Now, researchers have named this sexually transmitted canine cancer the oldest known line of cancer cells, at 11,000 years old.

This type of contagious cancer is extremely rare. Canine transmissible venereal tumor (CTVT) is one of only two known diseases in which cancerous cells from one animal infect another. The researchers compare CTVT to a millennia-old “parasitic life form.”

"The cancer cells in all the dogs around the world today are derived from the original dog," said Elizabeth Murchison, a study researcher and cancer geneticist at the Wellcome Trust Sanger Institute and the University of Cambridge, both in the United Kingdom. [10 Surprising Facts About Dogs]

By looking at a particular type of mutation in the cancer cells from two dogs, an Aboriginal camp dog from Australia and an American cocker spaniel from Brazil, Murchison and colleagues estimated when this original dog — Patient Zero for the bleeding, ulcerated genital tumor-causing disease — lived. And since the cancer cells still contain genetic material from the original dog, the team was able to extract a few clues to its identity.

The original dog was likely medium to large in size. It showed genetic similarity to an Alaskan malamute or husky, and carried a mix of genetic variations associated with the domestication of dogs. Because one of the dog's two sex chromosomes had disappeared in the cancerous cells, it was unclear whether this dog was male or female, and researchers have yet to determine in what part of the world it lived.

The other naturally occurring cancer spread by the transfer of cancerous cells is a facial cancer afflicting Tasmanian devils and transmitted they bite each other, and this disease puts the animals at risk for extinction. These cancers are extremely rare, because the immune system usually recognizes and attacks foreign cells.

In the DNA (deoxyribonucleic acid) of the dog cancer cells, researchers found what Murchison speculates is a clue to how this cancer established itself early on. Although the original dog lived about 11,000 years ago, its DNA showed a level of inbreeding similar to that of a modern dog breed, perhaps because it was part of an isolated population. It is possible the genetic similarity among the dogs it first encountered helped the cancer cells avoid recognition by their immune systems, allowing it to become established, Murchison said.

Likewise, the low genetic diversity among Tasmanian devils may have contributed to the emergence of the contagious facial cancer that threatens these animals, Murchison said. No similar cancer afflicts humans. However, some human cancers are associated with infection by viruses or other pathogens. For instance, human papillomavirus (HPV) is responsible for 26,000 cases of cancer annually in the United States, the U.S. Centers for Disease Control and Prevention has reported.

The new research is detailed in Friday's (Jan. 24) issue of the journal Science.