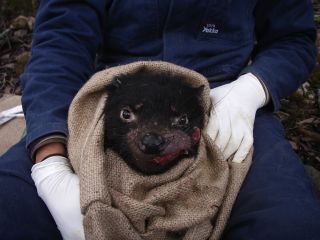 A cancer that has wiped out 70 percent of wild Tasmanian devils became contagious by "switching off" certain genes that would otherwise enable the immune system to recognize it, a new study finds.

Devil facial tumor disease is one of only two contagious cancers in the world (the other affects dogs and is nonfatal). It spreads when the Australian marsupials bite or nip each other, transmitting cancerous cells that grow into enormous face tumors. The cancer either metastasizes to other organs or prevents Tasmanian devils from eating or drinking. Either way, death usually occurs within six months. Experts predict the species could vanish within 20 years if the tumor disease isn't stopped.

The immune system should catch these tumor cells, but the cancerous invasion causes no immune response in devils, said Hannah Siddle, a University of Cambridge immunology researcher. Siddle and her colleagues have now discovered why: The tumor cells lack surface molecules called major histocompatibility complex molecules. These MHC molecules allow the immune system to detect the invading cells. Without them, the cancer is essentially invisible.

"That explains why the immune system of the devils doesn't recognize those DFTD (devil facial tumor disease) cells as foreign, as it should, or as cancerous, for that matter," Siddle told LiveScience.

But there is good news. Typically, cancer cells that ditch their surface coating of MHCs do so via a permanent genetic mutation. That's not the case for DFTD cells, said study researcher Jim Kaufman, also of Cambridge.

"What we stumbled on was the fact that the MHC molecules disappeared by regulation," Kaufman told LiveScience.

The researchers proved the concept by using a communication protein called gamma interferon to "switch on" the MHC-coding genes in a culture of devil tumor cells in a Petri dish. The once-MHC-free cells started making MHC molecules again.

In addition, the researchers examined tumor biopsies from wild Tasmanian devils and found that in some rare portions of tumor, immune cells were invading. In these areas, the cancer cells were making MHC molecules, suggesting that the genes can sometimes be spontaneously switched back on. It's not enough to save Tasmanian devils from death, but it does suggest hope for a vaccine, Kaufman and Siddle said. [See Photos of the Infected Tasmanian Devils]

"What we hope to do is to figure out a way to tip the balance so that the immune system does a better job of recognizing and can get rid of the tumor," Kaufman said. The researchers published the findings today (March 11) in the journal Proceedings of the National Academy of Sciences.

Development is going to take some time, Siddle said, but the researchers suspect the MHC finding could be a key step to creating a vaccine for the disease in the wild. Currently, the only way to save Tasmanian devils from extinction is to keep non-infected captive populations in zoos.

The finding is also a useful weapon in the arsenal against human diseases, Kaufman said. The more known about a particular disease agent in animals, the better prepared scientists are to face it should it ever strike humans. When the human immunodeficiency virus (HIV), a lentivirus, appeared on the scene, lentiviruses were largely a mystery, Kaufman said. It took years to catch up on a basic understanding of how the disease worked as humans died. In contrast, health professionals were much better prepared for the emergence of mad cow disease, because similar disorders such as scrapie had been studied in sheep and goats.

"There aren't any contagious tumors in humans yet," Kaufman said. "But one never knows when one is going to arise, whether it's next year or 1,000 years from now."