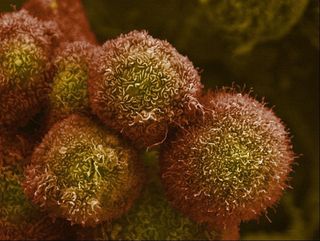 Normally, when a cell becomes damaged or doesn't divide properly, the body's natural recycling process breaks it down and it dies. Sometimes, though, the damage is to the genes that control a cell, and the result is out-of-control division. When this happens, a cancer cell is born.

New insights into how cancer cells arise and develop into tumors have come from researchers funded by the National Institutes of Health. Some of them are exploring the process by studying stem cells.

Despite decades of progress in the detection, treatment and prevention of many types of cancer, the long-term survival rate for pancreatic cancer remains very low. One reason is that pancreatic cancer rarely produces symptoms until it has spread in the body.

The late stage at diagnosis also poses problems for researchers who want to study the early development of pancreatic cancer, according to Kenneth Zaret of the University of Pennsylvania School of Medicine. That's because pancreatic cancer cells taken from people and then used to form tumors in animal models immediately produce the aggressive, advanced cancers from which they were derived.

Using tumor tissue from people with pancreatic cancer, Zaret and his colleagues succeeded in turning a sample of cancer cells back to an early, stem cell-like state. When used to create tumors in mice, these so-called induced pluripotent stem (iPS) cells formed early stage tumors and slowly progressed to invasive disease.

The human tumors grown in mice also secreted a wide range of proteins that are indicative of cell networks known to drive pancreatic cancer progression, as well as some not previously known to be associated with the disease. "We're setting up collaborations to test these markers for their utility in screening human blood samples and see if they function as markers for detecting or predicting pancreatic cancer in humans," said Zaret.

Scientists are also interested in using the iPS cells to screen new anticancer compounds and determine whether drugs under development might have the potential to help treat early stage pancreatic cancer.

Unraveling Cause and Effect in a Precursor to Esophageal Cancer

Like pancreatic cancer, esophageal cancer, which can begin anywhere in the muscular tube that runs from the throat to the stomach, has a low long-term survival rate. But unlike pancreatic cancer, research has produced insights into how to reduce the risk of developing esophageal cancer, including quitting smoking, reducing alcohol consumption and monitoring a potential precursor condition called Barrett's esophagus.

In Barrett's esophagus, the cells that line the lower esophagus, called epithelial cells, slowly change to resemble abnormal stomach or intestinal cells. The condition eventually progresses to esophageal cancer in up to 10 percent of cases. Scientists want to better understand the cellular mechanisms driving Barrett's esophagus to find ways to help treat it or prevent it from occurring and progressing to cancer.

The most common explanation for how Barrett's esophagus begins is that an excess of stomach acid, produced by conditions such as acid reflux (heartburn), washes up into the esophagus and causes tissue damage that leads to the production of the abnormal cells seen in the disease. Consequently, acid-reducing drugs are often prescribed to people with Barrett's esophagus to help slow its progression. However, new research from the lab of Heinrich Jasper at the Buck Institute for Research on Aging suggests an alternative explanation for the cellular changes seen in Barrett's esophagus.

Jasper's lab explores how stressful conditions affect the function of adult stem cells, which can become specialized tissue or organ cells. While looking at how stem cells control the regeneration of the gastrointestinal tract in a type of fruit fly, Jasper made an unexpected discovery: When a cell-signaling pathway driven by a protein called Dpp goes awry, it causes the stem cells that normally create the lining of the esophagus (the esophageal epithelium) to instead produce acid-generating stomach cells within the esophagus.

"What happens in Barrett's esophagus is really quite similar to what we observed [in fruit flies], which was a transformation of esophageal epithelium into something more like gastric epithelium," said Jasper. In other words, cellular changes in the esophagus may actually drive the excess production of acid rather than the other way around.

Jasper's lab is now working with collaborators at the University of Rochester to investigate this process in a mouse model of Barrett's esophagus. If something similar occurs in people, an understanding of errors in stem cell signaling might lead to the development of new treatments for Barrett's esophagus and the prevention of esophageal cancer.

Throughout the country, NIH-funded researchers continue to explore how our cells work normally and how they malfunction in disease. What scientists learn using stem cells, model organisms and a wealth of other approaches could help promote health as well as the diagnosis, treatment and prevention of diseases like cancer.

All-In-One Stem Cells Section from Inside the Cell Booklet

Once Upon a Stem Cell