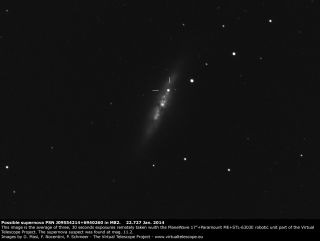 The supernova soon after its discovery on Jan. 22, 2014.
(Image: © Gianluca Masi – The Virtual Telescope Project)

An exploding star has suddenly appeared in the night sky, dazzling astronomers who haven't seen a new supernova so close to our solar system in more than 20 years.

In just the last few days, a the supernova emerged as a bright light in Messier 82 - also known as the Cigar Galaxy -  about 12 million light-years away in the constellation Ursa Major, or the Great Bear. The supernova, which one astronomer described as a potential "Holy Grail" for scientists, was first discovered by students at the University College London.

Positioned between the Big Dipper and the Little Dipper, the new supernova should be easy for skywatchers in the Northern Hemisphere to spot; it may even brighten enough to be visible through a small pair of binoculars, said astronomer Brad Tucker, of the Australian National University and the University of California, Berkeley. Beyond creating a skywatching spectacle, the cosmic event may also afford astronomers a rare opportunity to study an object that might help them understand dark energy. [Supernova Photos: Great Images of Star Explosions]

New supernova in the sky

The supernova was first observed Tuesday (Jan. 21) at 7:20 p.m. local time (19:20 UTC) by a group of students led by Steve Fossey at the University College London.

"It was a surreal and exciting experience taking images of the unidentified object as Steve ran around the observatory verifying the result," UCL student Guy Pollack said in a statement.

The only closer star explosion in the last three decades was Supernova 1987A, which was spotted in February 1987 in the Large Magellanic Cloud, a dwarf galaxy companion of the Milky Way about 168,000 light-years from Earth. Another star explosion discovered 21 years ago, 1993J in Messier 81, was essentially at the same distance as the new supernova, said International Astronomical Union General Secretary Thierry Montmerle.

"Although it is not visible to the naked eye there is a considerable interest as Messier 82 is such a nearby galaxy," Montmerle said in an email to SPACE.com. "Many telescopes around the world are now taking measurements (light curves and spectra) to determine which kind of star was the progenitor (the 'mother star')."

The supernova rate in a so-called starburst galaxy like M82 is typically quite high, "so in itself the event is not surprising," Montmerle explained. "But it is one of the nearest supernova in modern time."

Astronomers from Caltech have confirmed the supernova and classified it as a young, reddened Type Ia supernova. These kinds of objects are thought to originate in a close binary system where at least one star is a white dwarf, or a small, dense core of a star that has ceased undergoing nuclear reactions. If the white dwarf siphons off too much mass from its companion star, a runaway nuclear reaction begins inside the dead star, leading to a brilliant supernova.

Because Type Ia supernovas are believed to shine with equal brightness at their peaks, they are used as "standard candles" to measure distances across the universe. In fact, careful measurement of Ia supernovas led to the Nobel Prize-winning discovery that the expansion of the universe is actually accelerating.

But in order to learn more about the cause of the acceleration (what scientists call dark energy), Tucker said astronomers need more precise measurements.

"The two large problems with using Ia for distance measurements, are the progenitors, what the star that explodes actually is, and how dust affects these measurements," Tucker explained in an email. "So the fact that this [supernova] is a Type Ia, caught young, means we have a good chance of finding clues to the explosion."

The Hubble Space Telescope also captured detailed images of the Cigar Galaxy from before the star would have blown up, which means astronomers might be able to directly see the star in past observations, Tucker explained.

What's more, this is a "reddened" supernova, meaning it occurred a dusty environment.

"By knowing there is lots of dust, we can analyze out how the dust is impacting the colors of the [supernova] and therefore the distance measurements, and use this to calibrate other [supernovas]," Tucker said in an email. "In short, this is the Holy Grail."

The International Astronomical Union's Central Bureau for Astronomical Telegrams has listed some of the supernova sightings under the temporary designation PSN J09554214+6940260.

Images from the supernova-hunting KAIT robotic telescope at the Lick Observatory in California confirm the object was not present as recently as 15 January, meaning the supernova is a few days old, Tucker noted.

Editor's Note: If you snap an amazing picture of the new nova star explosion, or any other night sky view that you'd like to share for a possible story or image gallery, send photos, comments and your name and location to managing editor Tariq Malik at spacephotos@space.com.

Editor's Note: This article was updated on Jan. 23 at 8:30 a.m. to include comments from IAU General Secretary Thierry Montmerle.