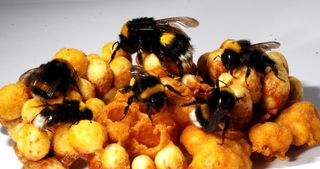 When it comes to reproduction in social insects, nobody competes with the queen.

For some time, scientists have known that queen insects give off chemical signals that prevent workers from reproducing. When a queen kicks the bucket, the signals wear off, and the workers become fertile again. Now, researchers have found that queen ants, wasps and bumblebees all use a similar type of chemical to signal fertility, which their ancestors evolved millions of years ago.

These chemical signals, called pheromones, are thought to make workers infertile. Studying how these pheromones evolved could provide a window onto how social insects developed their cooperative living system. [In Photos: Honeybee Scouts Find Food]

"Until very recently, there were only queen pheromones known in the honeybee," said Annette Van Oystaeyen, a social ecologist at the University of Leuven in Belgium, who led the study detailed online today (Jan. 16) in the journal Science.

Termites and one species of ant were later found to make these chemicals. That led Van Oystaeyen and her colleagues to look at other species to see whether they used similar pheromones.

Previous studies have shown that insects signal fertility using pheromones composed of saturated hydrocarbons — molecules made of single-bonded carbon and hydrogen. But only queen Lasius ants have been shown to use these chemicals to induce sterility in workers.

Van Oystaeyen's team searched for queen pheromones that might induce sterility in the common wasp, the buff-tailed bumblebee and the desert ant, identifying which chemicals the queens produced in excessive amounts.

Next, the scientists tested whether synthetic versions of the pheromones affected reproduction in worker insects that had had their queen removed. Afterward, they dissected the workers' ovaries to see whether these egg-producing organs were undeveloped, developed or regressed (producing eggs that were reabsorbed by the body).

In all three species, similarly structured hydrocarbons prevented workers from reproducing — either by preventing egg production or by causing egg reabsorption. The researchers compared their results with those of 90 other studies of 64 different species, finding that saturated hydrocarbons are the most common type of chemicals produced by queen insects. Scientists don't know exactly how these chemicals physically affect the workers, however.

Ancestors of bumblebees, ants and wasps, which were solitary, probably used similar pheromones to signal fertility millions of years ago, researchers say. It's possible that queens use them to "honestly" signal reproductive readiness, rather than to force workers to be infertile.

Scientists have long speculated about why social insect systems evolved. The main theory, Van Oystaeyen said, is that the ancestors of social insects were monogamous, so offspring were more related to each other than to their own young. Therefore, it might benefit daughter insects to help raise their siblings, rather than have young of their own.