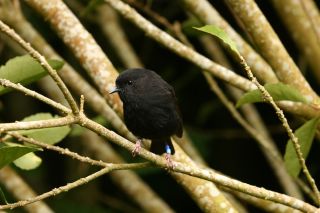 A Chatham Island black robin, a species that was nearly extinct by the 1980's, but that with some breeding help from humans has rebounded.
(Image: © Melanie Massaro et al. )

In the 1980s, the black robin was on the brink of extinction, having been reduced to just a single breeding pair by predation from cats and rats introduced to the islands where they live, southeast of New Zealand. To save the species, scientists encouraged the pair and their offspring to mate as much as possible, and even lent a hand to move eggs laid on the edges of nests, where they wouldn't hatch, into the middle of the nest, where they would.

But this well-meaning effort caused the bad egg-laying trait to perpetuate through generations, a rare example of how human interference can cause unforeseen effects on endangered species, said Melanie Massaro, a researcher at Charles Sturt University in Albury, Australia.Though the species recovered, by 1989, 50 percent of all black robins were laying these so-called "rim eggs."

What scientists didn't realize at first was that the male robin harbored a dominant allele (or genetic unit) for this egg-laying trait, meaning that half of his female offspring would be expected to show the trait, and the other half would get the normal egg-laying gene. Several of the male's first female offspring didn't show the rim-laying trait, however, so it wasn't immediately obvious where the trait came from. Half of the females that hatched from these "rim-eggs" also took on this rim-laying trait.  Only now, more than 20 years after the rim-laying peaked, were scientists able to carefully reconstruct the birds' family tree and determine where the trait originated, Massaro said. [In Images: 100 Most Threatened Species]

Males serve as silent carriers of the dominant allele, but don't express it since they don't lay eggs. Like females, males can pass on this defective gene to their female offspring, just as the last surviving male did to some of his brood. Luckily, he sired enough female offspring carrying the recessive allele — for normal egg-laying behavior — that the population has been able to rebound, the study noted.

"To see that this has been increased due to human intervention is an eye-opener and means we need to be more careful in the future" in managing other endangered species, said Scott Edwards, an evolutionary biologist at Harvard, who wasn't involved in the study.

In good news for the black robin, the rim-laying behavior has since been naturally selected against, and is now seen in only 9 percent of females, according to the study, co-authored by Massaro and published this month in the journal PLOS ONE.

Brought back from the brink

Black robins are still endangered, but there are now about 280 of the birds on two of the Chatham Islands. They are all descended from "Old Blue," the last fertile female left alive in 1980. To save the birds, researchers would take Old Blue's eggs from her and let them be raised by a related species, which encouraged her to lay more eggs sooner, according to the study.

The study highlights a dilemma faced in conservation efforts worldwide, said William Sutherland, a conservation biologist at Cambridge University, who wasn't involved in the study. Populations must grow quickly to avoid extinction, but "hands-on" human efforts to help this along can unintentionally relax natural selection by "allowing the survival of the 'not-so fit,'" Massaro told LiveScience.

In this case, the New Zealand Wildlife Service did exactly what they should have in the early days, and the fact that they saved the birds was miraculous, Massaro said. However, they didn't realize that they were unintentionally selecting for rim-laying.

In the future, once a population has recovered to some degree, "it is important to make sure that natural selection can act upon this population [using] hands-off management," Massaro said.

Maladaptive traits have often been selected for in domesticated animals, but that doesn't present the same kind of problem since these animals depend on humans for their survival. Silkworms, for example, have been bred to make silk and reproduce, and can no longer use their wings or mouthparts as they once could, the study stated. Domestic turkeys are usually bred via artificial insemination to maximize meat yield, and couldn't reproduce if they wanted to, according to the University of Minnesota.