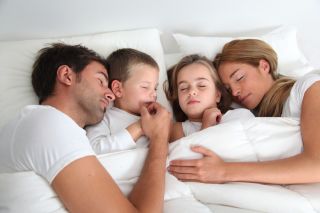 Does parenthood suck the joy out of life, or is it the key to happiness?

It looks like it's a draw: People with children in the home are about as satisfied with their lives as those who don't have kids at home, a new study suggests.

"Parents tend to value their lives more highly than people without kids, but they're different in lots of ways: They're richer; they're better educated; they're healthier," said study co-author Angus Deaton, an economist at Princeton University. "Once you control for those things, there's essentially no difference in life evaluation."

The findings, published today (Jan. 13) in the journal Proceedings of the National Academy of Sciences, suggest that people who choose one lifestyle over another will be pretty satisfied with their decision.

Studies on parenthood have come up with conflicting results. Some studies show that for young parents, happiness declines with the birth of each additional kid but that people with big families have more joy in midlife. Other studies have found that parents are happier than nonparents. And still other work has found that children put a damper on marital satisfaction.

Deaton and his colleague Arthur Stone, a psychiatry researcher at Stony Brook University in New York, looked at Gallup survey data from 1.8 million Americans, as well as from 1.07 million people in 161 countries throughout the world.

Survey participants indicated whether they had children in the home and answered several other questions, including one in which they rated their lives using a ladder scale from 0 to 10, with 10 being the best life possible and 0 being the worst. They also answered questions about whether they felt happiness, smiling, anger, worry and other emotions "a lot" or "not" the day before.

Overall, people with children at home tended to rate their lives higher than those without kids at home. But after controlling for other variables that are linked to life satisfaction — such as income, health and level of religiousness — that difference melted away.

The study can't fully answer the question of whether parents are happier than nonparents, because it didn't distinguish empty nesters, noncustodial parents and others who have children but don't live with them, Deaton said.

In the modern day, having children is largely a choice, said Andrew Oswald, an economist at the University of Warwick in England who was not involved in the study.

And what about the grandmas and busybodies who tell those planning not to have kids that they'll be so much happier once they do?

For people who don't want kids, "it may well be that yes, they would be just as happy without kids, particularly if they have things in their life that would be just as fulfilling," said Carol Graham, an economist at the Brookings Institution who was not involved in the study.

But there is one clear (if potential) benefit of rearing children: grandkids.

"There's quite a lot of evidence that grandchildren do make you happier," said Oswald, who just had a grandchild. "You can see why intuitively: Grandparents get a lot of the benefits without having to get up in the middle of the night."