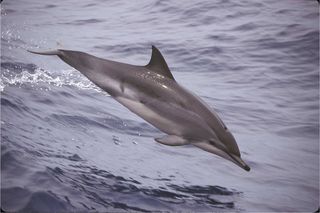 A clymene dolphin leaps into the air.
(Image: © R. Pitman.)

The identity of the short-beaked, streamlined clymene dolphin has befuddled researchers for decades. But a new study offers an explanation: This dolphin is the love child of two closely related species, striped and spinner dolphins.

Hybridization events like this — when two species interbreed to produce a third — are considered exceptionally rare among mammals, according to the research team, led by Ana Amaral, of the Universidade de Lisboa in Portugal and the American Museum of Natural History in New York City.

"Our study represents the first such documented instance of a marine mammal species originating through the hybridization of two other species," Amaral said in a statement.

The clymene dolphin, whose scientific name is Stenella clymene, lives in the warm tropical and subtropical Atlantic Ocean, although it has been spotted outside this zone. It resembles both the striped (Stenella coeruleoalba) and spinner (Stenella longirostris) dolphins, making the clymene difficult to classify. Early DNA studies produced conflicting results as to its relationship to the other dolphins, researchers wrote in a study published yesterday (Jan. 8) in the journal PLOS ONE.

Amaral and colleagues took another look at the dolphins' DNA to see if they could suss out exactly where the dolphin fit in.

Using skin samples collected by darts from a total of 72 free-roaming dolphins and dolphins killed in strandings, they found a telling discrepancy.

They looked at both the DNA from the dolphins’ mitochondria, the powerhouse of the cell, and the nuclei, the cells' command center. Their results suggested that the clymene dolphin's mitochondrial DNA is more closely related to that of the striped dolphin, while the nuclear DNA appears more closely related to the spinner dolphin, confirming the conflicting stories told by previous studies that also looked at genetic markers.

In the current study, the researchers suggest this discrepancy is evidence of a hybrid origin for the clymene. And since mitochondrial DNA is passed down only from the mother, the researchers propose the species got its start long ago when a female striped dolphin mated with a male spinner dolphin.

"With its similar physical appearance to the most closely related species, our genetic results now provide the key insights into this species origin," said Howard Rosenbaum, a senior author of the study and director of the Wildlife Conversation Society’s Ocean Giants Program.

Editor's note: This story has been updated to correct the name of the Wildlife Conservation Society.