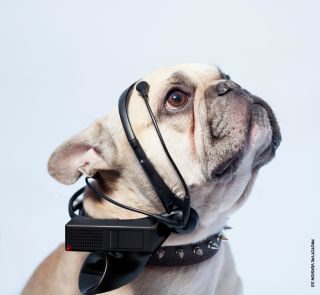 A dog may be man's best friend, but if people ever figure out what dogs are really thinking, will the friendship sour?

That's a risk that a few inventors in Europe are willing to take: They've received funding to develop "No More Woof," an electronic device that promises to analyze dogs' brain waves and translate a few of their thoughts into rudimentary English.

It's still a work in progress, but once No More Woof is ready for the market, it will join a wide range of other scientific efforts aimed at "breaking the language barrier between animals and humans," as the inventors state on their IndieGoGo.com fundraising page. [The 5 Smartest Non-Primates on the Planet]

Developed by the design team at the Sweden-based Nordic Society for Invention and Discovery (NSID), the No More Woof is a lightweight headset, sized for dogs, with sensors that can record electroencephalogram (EEG) readings.

The EEG readings are then analyzed by a Raspberry Pi microcomputer, which will, according to NSID, be programmed to translate those EEG readings into simple phrases like, "I'm hungry," or "Who is that person?" Once translated, those phrases will be reported over a small speaker.

If and when the No More Woof ever comes to market, it would mark the latest in a centuries-old effort to communicate with dogs, dolphins, apes and a whole menagerie of other animals.

Scientists recently developed a speaker that can project the full range of the high- and low-frequency sounds that dolphins make — including those used in dolphin-to-dolphin communication and the echolocation clicks used to locate food.

Dolphin researchers designed the speakers to broadcast a specific series of vocalizations and then record dolphins' responses; over time, this back-and-forth could reveal what dolphins are "saying," eventually opening up the possibility of human-dolphin communication.

"We know very little about how dolphins classify their own sounds. We need more perceptual studies to find out, and this equipment may help us do that," Heidi Harley, a comparative cognitive psychologist at New College of Florida in Sarasota, told LiveScience in a previous interview.

Dolphins are prime targets for communication research, due to their complex social structures and highly developed brains, but they're not the only animals that scientists are struggling to communicate with through sounds, physical gestures or some combination of those.

Koko, a famous gorilla living in captivity in California, reportedly has a vocabulary of about 2,000 words. She and her trainers use a form of sign language to communicate and understand those words. And a border collie named Chaser has been credited with understanding more than 1,000 spoken words.

But in a significant paradigm shift, more researchers are now eschewing teaching human words to animals, instead trying to decode the chirps, whistles, roars and other sounds that animals use to communicate with one another.

Constantine Slobodchikoff of Northern Arizona University has spent years deciphering the language used by the Gunnison's prairie dog, a species native to the U.S. Southwest. Slobodchikoff discovered that these prairie dogs have a surprisingly complex language that can, for example, describe the size, shape and color of clothes worn by a human intruder.

No dog left behind

The dog researchers at NSID hope that future refinements of their No More Woof device could communicate complex thoughts with more specific descriptions, such as, "Who is that woman? She looks nice!"

While that level of sophistication will take some time and a lot of research, the NSID crew is encouraged by the level of interest their crowdfunding effort has attracted: They've exceeded their original funding request of $10,000 by several thousand dollars, and are continuing to attract donations.

If successful, NSID designers hope to ship their first No More Woof prototypes to eager dog owners worldwide by April of this year. But the designers' sights are set much higher: "We believe that within a few years the technologies we are working with will revolutionize our relation to pets and animals," according to the group's IndieGoGo website.