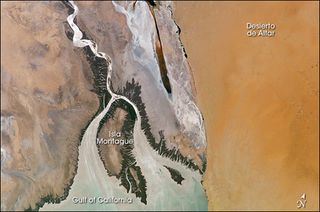 The Colorado River Delta, where the waterway empties into the Gulf of California in Mexico, as seen by an astronaut aboard the International Space Station on June 2, 2004.
(Image: © EOS.)

An artificial flood could surge down a dry riverbed from the United States into Mexico either this spring or an upcoming one — a technique researchers hope will help them find out if renewing water in this landscape might rejuvenate life in the area.

The flood is one consequence of a five-year agreement signed in 2012 as part of the U.S.-Mexico Water Treaty. This section of the treaty, known as Minute 319, mostly deals with issues such as how the countries will share and store water, but it also permitted an experiment to send a pulse of 34 billion gallons (130 billion liters) of water coursing down the Mexican extent of the Colorado River, a stretch drained dry by overuse upstream in the United States.

"This could mark a new era of collaboration among users of the river's water — one that benefits the environment," said Karl Flessa, a conservation biologist at the University of Arizona in Tucson, and one of many people involved in the effort.

Decades of dams and diversions

The Colorado River system is among the most extensively dammed, diverted and regulated rivers on Earth, Flessa noted. Before the 1930s, about 4.9 trillion gallons (18.5 trillion liters) streamed from the U.S.-Mexico border to the Gulf of California each year, supporting numerous wetlands and a major estuary. After decades of dams and diversions, only a tenth of that amount of water crosses the border into Mexico each year, and all of it is diverted for use in Mexican agriculture and cities.

Only about 10 percent of the Colorado River Delta's original wetland and riverbank areas now remain, with less than 3 percent of the native cottonwood and willow forests surviving. The dry, largely derelict channel is now wet only when it rains or in places where irrigation channels or irrigated areas return or leak some water.

Because the floods rejuvenated these riverbank zones, conservationists were hopeful that the wetlands could be restored. The experiment the researchers plan could shed light on how the United States and Mexico could best revive the delta. (Researchers have intentionally generated floods before in the United States, such as farther up the Colorado River in the Grand Canyon last year.) [Before & After Images: Grand Canyon Flood]

The pulse down the Colorado would be released from Lake Mead, the largest U.S. reservoir, formed by the Hoover Dam and straddling Nevada and Arizona. The deluge is expected to flood low terraces and backwaters, churn sediment, and promote the growth of cottonwood and willow tree seeds.

"The purpose of the pulse flow is to improve surface water and groundwater conditions in the delta and to enhance the delta's natural vegetation and wildlife," Flessa told LiveScience.

Research teams from agencies, universities and environmental groups from both the United States and Mexico will monitor the effects of this pulse, analyzing the area before the flood, immediately following it and into the future. For instance, researchers on the ground will track where the water flows on the surface, examine how it infiltrates the groundwater, and monitor vegetation and bird life.

"In addition to field work, we will be using satellite images to study the response of vegetation in the following four years," Flessa said.

Their findings could help shed light on how water might flow into this area in the future.

"We need to figure out how we can manage water for the delta environment so that it does the most good," Flessa said. "We are still in the planning stage for the experimental pulse flow."

The researchers do not expect quick answers from the experiment. For instance, "seedlings will take a while to grow and become established," Flessa said. "The response of bird populations may also not be evident for a few years."

The water agreement remains in effect through 2017. The scientists hope the benefits of this flood "will lead to a renewal of the agreement and more pulse flows in the future," Flessa said.

Flessa and his colleagues detailed their plans for the experiment Dec. 10 in Eos, the newsletter of the American Geophysical Union.

Editor's note: This story has been updated to correct the possible timing of the flood — it is not definitely schedule for this spring.